Eric Greitens at the current time is possibly single.

Eric was married to his first wife, Rebecca Wright, and divorced in 2003.

Later, he was married to Sheena Elise Chestnut from 2011-2020 for 9 years. Together they have two sons. Eric and Sheena announced they were ending their marriage on April 11, 2020.

Greitens confessed that in 2015, he was in an extramarital affair with his hairstylist. The woman said that Eric invited her to his home. Where she was undressed and blindfolded and took pictures of her body without her consent.

But Eric denied the blackmail accusation and took any such photos.

When the woman tried to leave, Eric threatened her saying,

The woman also added that Eric smacked, grabbed, and shoved her down on the ground. 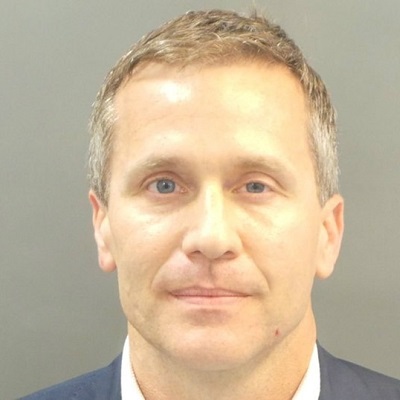 Every entrepreneur has to deal with hardship, but if we're tough enough and thoughtful enough, we can find a way to make hard things make us better.

Who is Eric Greitens?

Eric Greitens is an American politician, leader, author, speaker, and a former Navy Seal who was the 56th governor of Missouri from January 2017 and resigned in June 2018 amid allegations of sexual misconduct and campaign finance impropriety.

In addition, he is also the founder of a non-profit group, The Mission Continues, which connects veterans with volunteer work to help them in their post-military transitions.

Eric is a son of Becky and Rob Greitens and was raised in his mother’s Jewish faith. His father was an accountant in St. Louis for the Department of Agriculture. Likewise, his mother is also retired as an early childhood special education teacher in St. Ann, Missouri for the Pattonville School District.

He graduated from Duke University in 1996 and became a Rhodes Scholar in 2000. After high school, he majored in ethics, philosophy, and public policy at Duke University.

Furthermore, he was a member of Lady Margaret Hall and studied development studies, receiving an M.Phill. in 1998 and a Ph.D. in 2000.

In his early days, Greitens has taught public service at the Truman School of Public Affairs and was an adjunct professor of business ethics in the MBA program at the Olin School of Business at Washington University in St. Louis.

Greitens declared a state of emergency and activated the Missouri National Guard on Feb 24, 2018, in response to severe weather that began on Feb 23.

•President George W. Bush awarded Greitens the President’s Volunteer Service Awards for his work at The Mission Continues on October 3, 2008.

•Greitens received the HOOAH Award in 2009, presented by the National Conference on Citizenship to recognize “a notable veteran who defines their citizenship through service to our country”

•Eric was announced as the winner by the people in the People’s All-Stars Among Us competition in June 2010.

•Greitens was awarded the honorary degree of Doctor of Humane Letters(DHL) from Tufts University.

There is no exact information about his net worth and salary. According to our analysis, Eric Greitens earns around $1.5 million.

Greitens has not been part of any rumors and controversies up to date as he has maintained a clean profile.

Eric has a fair complexion with a pair of blue eyes and Grey hair color. However, he has not talked about his body measurements including height, weight, and others.

•TIME Magazine named Greitens to its 100 Most Influential People in the World in April 2013.

•Greitens is the Former President and founder of The Mission Continues, a nonprofit organization for veterans.