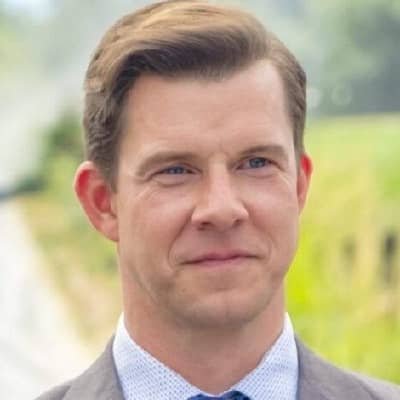 Eric Mabius is a married man. He tied the knot with an American Interior Designer, Ivy Sherman. The lovers met in high school during a health education class and eventually started dating and tied the marital knot in January 2006.

They have two children namely Maxfield Elliot (born on June 27, 2006), and Rylan Jaxson (born on December 7, 2008). Currently, he resides with his wife and children. There is no such news of their separation and divorce.

Who is Eric Mabius?

Eric Mabius is an American actor and producer who has appeared in various Tv shows and Films. Likewise, he is known as Tim Haspel on the Tv series, The L Word.

Eric Mabius was born on April 22, 1971, in Harrisburg, Pennsylvania, USA. As of 2021, he will be celebrating his 50th birthday. His full name is Eric Harry Timothy Mabius.

Likewise, he is the son of Craig Mabius, a historian, and Elizabeth Mabius. His mother is Polish and his father is of Austrian and Irish ancestry. He has a brother named Craig. Similarly, he started acting at a very young age.

Eric is of American Nationality and his ethnicity is mixed (Polish, Austrian, Irish). Moreover, his birth sign is Taurus.

Having started his acting career in 1995 with a minor role in the dark comedy movie Welcome to the Dollhouse later he appeared in the Tv film ‘The Journey of August King’ as Hal Wright in the same year followed by another Tv film ‘I Shot Andy Warhol’ in 1996.

After that, there is no looking backward and he has gained more than 70 acting credits to date. Some of his most notable appearances on television include The O.C. in 2005, Tv Series Eyes in 2005-2007, and this was followed by another Tv Series The L word in 2004-2009. He has also appeared on ‘Ugly Betty,’ ‘Reading Writing & Romance,’ and ‘Signed, Sealed, Delivered’ among others.

Furthermore, his latest movies are Inside Game, It’s Beginning to Look a Lot Like Christmas, and Untitled Signed, Sealed, Delivered.

There are no details of his salary but he has an estimated net worth of over $3M. Eric is considered to be one of the highest Hollywood actors.

Eric has won Special Jury Prize: Best Ensemble in Los Angeles Asian Pacific Film Festival for Where the Road Meets the Sun in 2011. Similarly, he has been nominated twice for Screen Actors Guild Award and once for the PRISM Award.

Eric stands 5 feet and 10 inches tall and his weight is 72 kgs. He has light brown hair and blue eyes.