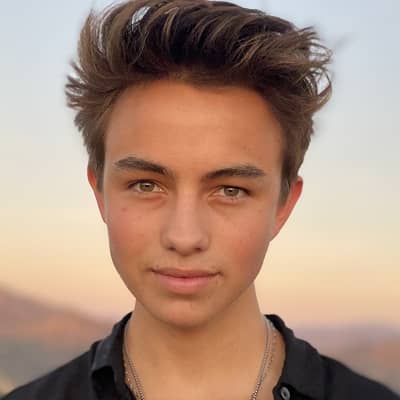 Eric Montanez’s relationship status is possibly single. He has not disclosed details about his affair or girlfriend details.

Who is Eric Montanez?

Eric Montanez is an American model and actor. He is also a social media star and is popular for his content on TikTok.

He was born on 27 Nov 2003, in San Diego, California, the US. The name of his father is unknown and his mother’s identity is also not revealed.

Moreover, his ancestry is Caucasian but he has not disclosed his academic history.

Eric Montanez as an actor was seen in Attaway General a TV Series of 2020. He played the character of Holden for 12 episodes.

This show is of the drama genre and the other main leads are Madi Monroe, Dean Testerman, Lauren Kettering, and more. Moreover, he also appeared in a TV documentary titled Teens Wanna Know in the year 2019.

Besides acting, Eric is also known for his TikTok contents. On this platform, he posts videos related to lip-sync and comedy. He is also a model and is signed by Vertex Management Group in 2019.

This actor has an estimated net worth of $500k as of the year 2021. The yearly or monthly salary from his career is unknown.

He did a clothing deal with a company named Elwood, Los Angeles. He also earns from merch which he launches on his own website.

Some popular TikTok users’ net worth is,

This media star has not been involved in any sort of rumors or scandals yet and is doing great in his digital career.

Regarding Eric Montanez’s body features, his height and his body weight are unknown. Moreover, the color of his eyes is brown and his hair is also light brown.

He is available on social sites. His Instagram is followed by over 282k people. Moreover, his TikTok account has gained more than 3.1m followers with over 118m likes.