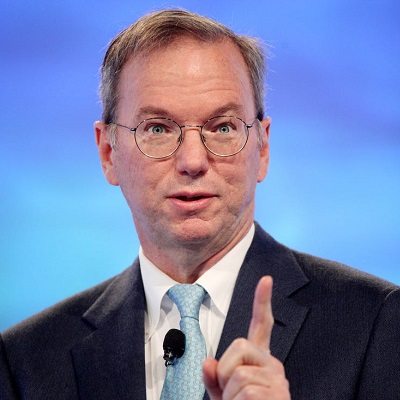 If you have something that you don't want anyone to know, maybe you shouldn't be doing it in the first place.

The Internet is the first thing that humanity has built that humanity doesn't understand, the largest experiment in anarchy that we have ever had.

A mind set in its ways is wasted. Don't do it.

Eric Schmidt is a married man. His wife, Wendy Susan Boyle is also a business personality. The wedding took place back in June 1980. There were rumors that they are separated back in 2011, however, he is still married and has no plan of divorce.

Together, they welcomed their first daughter, Sophie. Later, they had their second daughter, Alison. However, Alison passed away back in 2017 from an illness.

Who is Eric Schmidt?

American Eric Schmidt is a business entrepreneur and software engineer. He is renowned as the former CEO of Google.

Currently, Eric is the chairperson of the Defense Innovation Advisory Board of the US Department of Defense.

Eric Schmidt was born on the 27th of April 1955 in Falls Church, Virginia to Eleanor and Wilson Schmidt. His birth name is Eric Emerson Schmidt.

His Late father, Wilson Emerson Schmidt was a professional by career. He used to be a lecturer in international economics at Johns Hopkins University. Also, Under the Nixon Administration, he worked for the U.S. Treasury Department.

His mother is Eleanor Schmidt and he has two siblings that include two brothers, Orrin and Carl. They are of Jewish-Germanic ethnicity.

Later, in 1976, he graduated from Princeton University with Honors in electrical engineering. However, he joined the University under the architecture stream.

Moving forward, in 1979, he earned a master’s degree with Honors in designing and implementing a network under computer engineering from the University of California. After that, In 1982, he earned a Ph.D. degree in EECS.

– Eric Schmidt started his career holding some technical position in research and development in the IT companies that include Bell Labs, Zilog, and Palo Alto Research Centre.

– In 1983, he joined Sun Microsystems as a software manager. However, he served the company at positions like director, Vice President, and President.

– Moving forward, in April 1997, he joined Novell as the CEO, Chairman, and board of directors. In 2001, he left the company to join Cambridge Technology Partners.

– In March 2001, he joined Google as the board of directors. Later, in August, he was appointed as the CEO of the company.

– Also, on the 28th of August 2006, he was elected as the board of directors for Apple Inc. He continued the position till August 2009.

– In March 2016, he joined the Department of Defense as chairperson of the Defense Innovation Advisory Board.

– Besides that, he has been associated with other business ventures like Mashape, Uber, and Formlabs. Also, he is the author of books like 2019- Trillion Dollar Coach, 2014- How Google Works, and 2013- The New Digital Age.

As of now, he has an estimated net worth of $15.6 billion making the 84th richest name in the world. That includes the 4.1 million shares of the Alphabet stock.

Also, he owns the superyacht name Oasis built in 2006 and designed by the company, Galde Johnson Design. The consists of the furniture worth $11 billion back in 2017.

He made the net worth with his earnings through his business profit and career as the CEO of Google.

Recently, the business tycoon has made the headlines by leaving Google completely. Till the last year, he was a member of Google’s board. However, neither Google nor Eric has made statements in the matter.

He left the company to take government military projects. Also, New York Governor Andrew Cuomo tapped him to an advisor to the state’s task force for COVID-19.

Eric Schmidt has blue eyes with auburn hair. His height is 5 feet 10 inches and weighs around 66 kg.