Eric Stoltz is an actor, director, producer. He was nominated for Golden Globe Award. Eric is married to his girlfriend since 2005. The couple has two children. 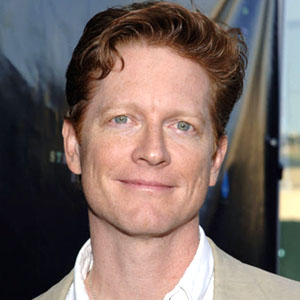 Let's not kid ourselves here, robots already run most of our world. We'll be their butlers soon enough

It just seems to me that the world's kind of a mess, and the more messy it gets, the more interested I am in escapist fare. Having a good time is something that isn't about the war in Iraq or the Asian flu or the Kyoto protocol - things that are horribly depressing to consider in our real lives. I'm eager to get away from them

I know a lot of writers who would much rather be writing the Great American Novel, but they've got bills to pay and alimony, and so they take a job at a less-than-reputable paper. You know, you do what you gotta do.

Tall and handsome Eric Stoltz is a married person. After being in a relationship with singer Bernadette Moley for several years they finally got married in 2005.

They have already welcomed their first daughter named Catalina Stoltz. About their second child, there are no details available.

Who is Eric Stoltz?

Eric Stoltz is an American actor, director, and producer. He is extremely prominent for starring as Rocky Dennis in the drama ‘Mask’ for which he was nominated for a ‘Golden Globe Award’ for Best Supporting Actor in a Motion Picture. He has made a respectable position in the American entertainment field and able to gain more fame and fans.

Eric was born on September 30, 1961, in California U.S.A. His nationality is American and belongs to Mixed (German, Scottish, and English) ethnicity.

Stoltz was born to Evelyn B(mother), a violinist and schoolteacher, and Jack Stoltz(father), also a school teacher. He was raised with his parents in an entertaining and musical environment.

Being a son of a violinist, he was pretty good at playing violin and piano. He earned money at a very young age playing piano for a local musical theater production.

Concerning his educational background, he attended the University of Southern California and dropped out after his junior year and moved to New York to pursue a career in the acting field.

In New York, Stoltz started taking drama classes but dropped out from there pursuing film and T.V roles. He made T.V debut in 1978 in T.V series “James at 15” as Jack in the episode of “Hunter Country”. Stoltz made his film debut in the year 1982 and appeared in “Fast Times at Ridgemont High” as a Stoner Bud.

Soltz was so clever that he made friendly relations with director Cameron Crowe who promised Stoltz to give a role in his all future films and appeared in each of Crowe’s films “The Wild Life”, “Say Anything”, “Singles”, and “Jerry Maguire”.  He made a strong base within a short interval of time in the American entertainment field and started starring in different films and T.V shows.

Working in a different field, he has earned a good amount of money and has an estimated net worth of $5 Million.

Despite being a well-known actor, producer, and director, there are no desperate rumors regarding Stoltz’s personal and professional life.

Eric Stoltz has a height of 6 feet. His body weight is not known. He has red hair and blue eye.

Also know more about the early life, career, net worth, relationships, and controversies of other actors, directors, and producers like Jared Sandler, Kiefer Sutherland, Michael Landon Jr., and Michael Landon.