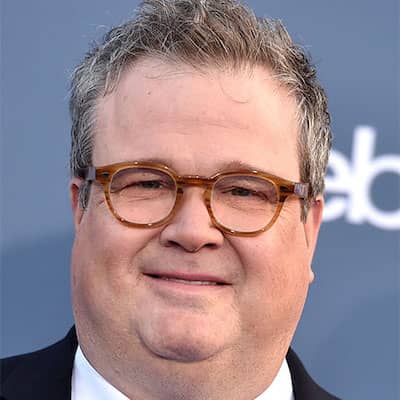 My dad had a retail business in Leavenworth, Kansas, and there's a whole bunch of prisons there, so it was a backdrop of my childhood, these ominous prisons sitting off the road

When I was a kid, I wanted to be a clown. I didn't want to be an actor, I wanted to join the circus and entertain people.

The most important thing for me as an actor playing a character is to make you laugh. That's my No. 1 goal.

They started to date each other from the year 2016 and in Aug 2021, they got engaged. Eric shared adorable pictures of them where her fiancee is flaunting their engagement ring.

Moreover, there were rumors of him seeing Charlize Theron in 2012 and Bethenny Frankel in 2015.

Who is Eric Stonestreet?

Eric Stonestreet is a popular American actor plus comedian. He is popular for his acting skills in Modern Family, Bad Teacher (2011), Identity Thief (2013), and more.

His birthdate is 09 Sep 1971 and he was born in Kansas City, Kansas, the US as Eric Allen Stonestreet. The name of his mother was Jamey Ann Ball and his father was Vince Stonestreet.

His mom was a teacher while his dad was a businessman.

Eric’s ancestry is a mix of Austrian-German-English and has a sister named Mauria Stonestreet.

Regarding his academics, he attended Piper High School and then enrolled at Kansas State University.

From the latter, he got his degree in sociology in 1996. Further, he also went to ImprovOlympic and The Second City Training Center in Chicago.

Eric Stonestreet is a popular face of the entertainment world who has appeared in several TV plus movies. His latest movie is titled The Secret Life of Pets 2 that was released in the year 2019.

His other briefly featured TV shows are,

By the reports of 2021, he has accumulated a net worth of around $23 million US. As for the salary, he charges $500 Thousand per episode.

This Cameron from Modern Family is keeping himself away from rumors and desperate scandals.

But recently some trollers trolled for getting engaging to a 41 years old nurse. They said he is too old for her fiancee. But this comedian gave a hilarious response by posting Lindsay’s edited wrinkled and aged picture.

Eric Stonestreet’s height is 6 ft and his body weight is 125 kg. In addition, his eyes are blue and his hair is in grey color.

Eric is available on many social sites. He is on Instagram and Facebook where he has more than 2.3M and 837k followers respectively.

Bethenny Frankel’s fairy tale marriage falls apart: The bitter courtroom battle and her continuous dramatic saga with her ex-husband: Know it all here!