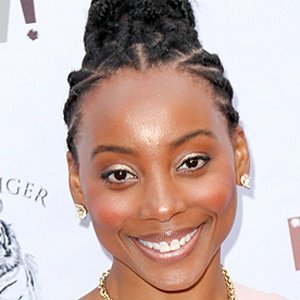 I love going after what I want and not stopping till I get it.

My natural hair is short and naturally grows to frame my face. So that's my favorite. I also like tree-braids. They're easy, fast, there's not much pulling on your hair, and they are very lightweight.

Moisture, moisture, moisture is the key to maintaining our hair. I use water-based products and try to put something on my hair every day. I pay special attention to my edges, as they are so fragile.

Erica Ash is currently single. Also, she has not been linked with any person. She is very secretive regarding her personal information and she often avoids questions about her relationship status. Hope, she will find the perfect one very soon.

Who is Erica Ash?

Erica Ash is an American actress, model, singer, and comedian who is best known for her appearances in ‘Scary Movie 5’ in 2013, ‘Survivor’s Remorse’ in 2014 and ‘Miss Me This Christmas’ in 2017.

She was born on September 19, 1977, in Florida, USA. She is currently 41 years old. Her father’s name is Donald Ash and her mother’s name is Diann Ash. Her parents were in the military and the family had to relocate often. She has two brothers: Derrick and Donald B. Ash and a sister: Adrienne Ash.

She attended a performing-arts school in Decatur, Georgia, during her youth and then she planned on becoming a doctor, graduating from Emory University with a degree in premedicine and prepared to attend medical school

She served as a backup singer and runway model after a trip to Japan and she elected for a career in entertainment. He appeared in Broadway shows like ‘The Lion King’ In 2006 and also a two-week job in Germany.

After returning from Germany, she auditioned for the comedy show ‘The Big Gay Sketch Show’ and got selected and became the cast member for only two seasons.

In 2008, Erica Ash joined the cast of MadTV as a featured performer along with Eric Price, Matt Btaunger, and Lauren Pritchard. She became the fifth African-American female cast member in the show’ history and she and Hall are the only two who were never promoted to a repertory player.

Recently, she appeared as ex-prostitute in ‘Skin in the Game’ in 2019 and as Veronica Greasley in ‘Legacies’ in 2019.

This actress till now has not been in any big controversies or rumors.

The American plus-sized model Ashley Graham posted a nude photo on Instagram! Know about her pregnancy and marriage