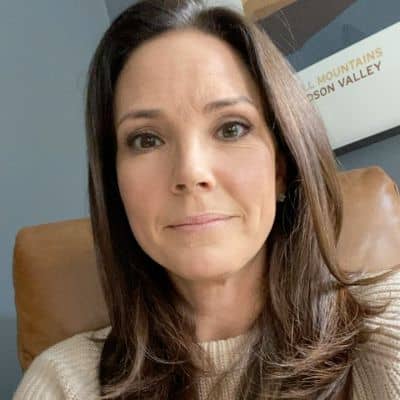 Talking about her love life, Erica Hill is married to her longtime partner, David Yount. David is a well-named lawyer and businessman by profession.

The couple tied the knot on 15 October 2005 after dating for a long time. The couple has two beautiful children named Weston Robert Yount and Sawyer Steven Yount. Weston was born on 25 November 2006 whereas Sawyer was born in March 2010.

Who is Erica Hill?

Erica Hill is a well-recognized American journalist and television host. Hill presently serves as a primary substitute anchor and a correspondent for CNN.

Erica Hill was born on 20 July 1976. At present, her age is 44 years old. Likewise, her birthplace is Clinton, Connecticut, USA.

Erica is the daughter of her father, Steven Holmes Hill whereas her mother is Cheryl Hill.

Talking about her nationality, Hill holds an American identity whereas her ethnicity is Caucasian.

Regarding education, the journalist completed her graduation with BA in journalism from Boston University in 1998.

Professionally, Erica started her journalism career in 1998 working as a production assistant for “PC Week Radio”, the online news program for PC Week magazine. She also worked as a conference coordinator for the Software Publishers Association Europe. Hill is notably known for her live reporting of the 11 September 2001 terrorist attacks when she was working for TechTV.

The American journalist CNN‘s Headline News channel in January 2003 working as a general news anchor for different programs. Also, the journalist co-anchored Prime News Tonight from 2005 to 2006. She also co-anchored CNN Tonight during its November 2009 to January 2010 run.

Hill then joined NBC News on 3 November 2012 on Weekend Today as co-anchor and would serve as an NBC News national correspondent. On 3 April 2016, Erica announced she was leaving the Weekend Today show in order to spend more time with her family.

She returned back to CNN on 19 April 2018, Erica returned as a lead fill-in anchor and national correspondent.

A talented American journalist, Erica has earned a handsome amount of money from her profession. She has been active in her profession from the year 1998 till the present.

It is reported that Erica Hill has an estimated net worth of $6 million.

Erica has never been part of any controversial matter or rumors till now. The journalist has been preoccupied with her professional and private life.

It seems that Hill prefers enjoying her personal life and does not want to merge it with her professional life.

44 years old star, Erica has gorgeous looks and an admirable personality. She stands at a height of 5 feet 6 inches. Also, she has a balanced body weight of 58 kg.

Furthermore, Hill has brown eyes whereas her hair is dark brown. Her body measurement is 33-24-35 inches(chest-waist-hip) respectively.

Erica wears a bra size of 38B.

Regarding her social media presence, Erica Hill is an active personality on social media. Erica has more than 45.5k followers on her official Instagram account @ericahill.

She is also active on Twitter with around 84k followers.

Moreover, Hill is also available on Facebook with nearly 103k fans and supporters.