Erica Mena is a popular model, a media personality. 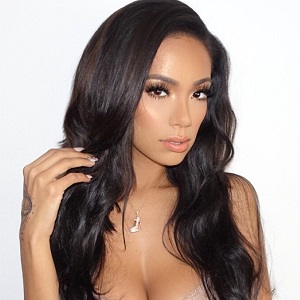 She and Safaree married on 7th October 2019. They have a daughter Safire Majesty Samuels born on 2nd February 2020. And she is pregnant with her ex-husband Safaree’s second child. Amid divorce, she wants her daughter’s joint legal custody and child support. However, the couple has not revealed the reason for their split.

During her relationship with Raul Conde, she had a child named, King Conde.

Who is Erica Mena?

Presently, she is a prominent figure among the media for her appearance in “Love & Hip-Hop: New York”. She starred in that show from 2011 to 2015. Additionally, she is also famous for co-hosting “Bad Girls Club: Social Disruption”.

Erica was born in the Bronx in New York City in the state of New York. Her ethnicity is a mixture of Puerto Rican and Dominican. Born on November 8, 1987, she is 33 years old as of now. Erica grew up with an interest in modeling. As per her early life and childhood, there is no information regarding it.

Similarly, she hasn’t shared any information regarding her academic achievement or education till now.

Erica started her modeling career at a young age. At the age of 14, she won a “Jeniffer Lopez lookalike contest”. This for sure boosted her confidence. She started taking modeling seriously. Afterward, she did modeling for different agencies. Her mainstream success came after she became a TV personality. In 2009, she featured in a reality show, “Kourtney & Khloe Take Miami”. This appearance made her a famous face in Hollywood. She went on working hard. Consequently, she got her career breakthrough role in the show, “Love & Hip-Hop: New York”.

Additionally, she is also an author. She published books of “Chronicles of a Confirmed Bachelorette” and “Underneath It All”.

Presently, she earns a massive amount of salary and has a net worth of $1 million.

Erica has been part of several rumors. In 2016, rumors suggested that she dated a female rapper, Trina. Additionally, she faced controversy when she called Bow Wow an abuser.