Updated On October 12, 2022 | Published By: Frances West | In Pregnant , Relationship
Share this 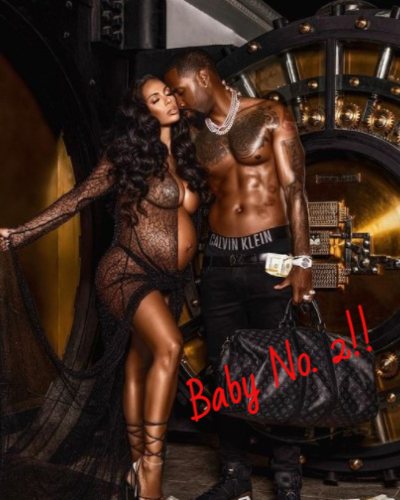 Erica Mena and her husband, Safaree Samuels are all set to welcome their baby no.2. The couple recently announced the news to their fans and followers.

Erica and Safaree are expecting baby no. 2

On Monday, the Love & Hip Hop star and his wife announced the couple is expecting their second baby. The mother of one shared a picture of her growing pregnancy announcing the news on the caption.

She is already a mother to a 15-months baby girl. She captioned the picture of her maternity with the adorable caption which reads:

Moreover, she also shared a series of pictures on her Instagram page. Mena shared the picture of her growing baby bump sharing the pregnancy update with her followers. On the other hand, her husband dedicated a sweet post for his baby mama on his social media. The Love & Hip Hop star wrote:

I love you my beautiful wife.. thank you for being the glue to our puzzle ❤️❤️❤️❤️. I hope y’all don’t mind getting all this belly this summer.”

They announced their first pregnancy a few days before their wedding.

Safaree met his now-wife first met on Scared Famous in 2017. In 2018, just a year later, they started dating. After a month of dating, he went down on one knee to propose to Erica marry him. He gave Mena ring on Christmas eve of that year. On October 7, 2019, Erica and Safaree tied the knot in a secret ceremony.

The couple had their big day ceremony at Legacy Castle in New Jersey. The rapper and Erica officiated their wedding with a matching six-figure wedding band. His and hers rings approx. cost around 48.25 carats of diamonds totals between both rings.

However, things did not go as smoothly for the couple at the end of 2020. Safaree made a now-deleted post on his Instagram giving a hint of their separation. The couple who was making OnlyFans video together in the pandemic had a break for a while.

At the time, he made a post posing in front of his Orange Rolls Royce mentioning himself “Bachelor”. They got back together later on and now expecting their second baby together.

Presently, she is a prominent figure among the media for her appearance in “Love & Hip-Hop: New York”. She starred in that show from 2011 to 2015. Additionally, she is also famous for co-hosting “Bad Girls Club: Social Disruption”. See more bio…