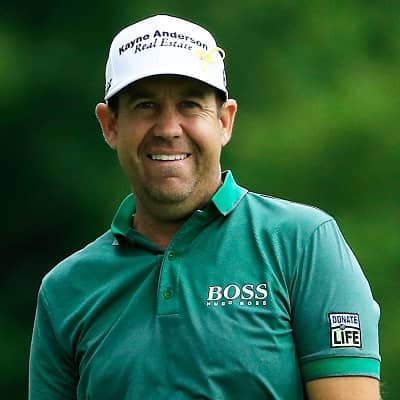 Erik Compton’s current relationship status is divorced. He was married to Barbara Casco Compton. They met each other when Erik was 28 and Barbara at her 22.

The couple started dating and married on August 10, 2008, in Palmetto Bay, Florida, United States. They also have a daughter together named Petra Compton in 2009.

Though living together for certain years, the couple gets separated in 2017.

Who is Erik Compton?

Erik Compton is a Norwegian-American professional golfer. He is one of the successful golfers and also has received various awards through his professional life.

He is noted for having two heart transplants. Further, he founded “The Erik Compton Foundation”.

He belongs to an American father, Peter Compton, and a Norwegian mother, whose name is not disclosed.

He learned the game of golf at the age of 12. Erik was the number 1 junior golfer in the United States and also the 1998 AJGA Rolex Junior Player of the Year.

He holds Norwegian-American nationality and is of Norwegian and English ethnicity.

He completed his schooling from Miami Palmetto Senior High School and graduated from The University of Georgia.

Erik Compton started his professional career in 2001. He played on the Nationwide Tour from 2002 to 2007.

From 2001, Erik played on the Web.com and Canadian Tours up to 2007. He wins twice in 2004 earning Compton the Order of Merit title. Likely, by winning the Hassan II Golf Trophy of Morocco in 2005 he continued his success in golf career.

In 2010 Erik continued his golf career even after his surgery. He was able to make the cut in five of seven PGA TOUR events. The 2011 Web.Com Tour season lead Erik to earn his PGA TOUR card for the first time. From there, Erik assured himself a spot on the PGA Tour for the 2012 season.

Playing the 2015 season, Erik was recorded top 10 and finished the season 124th in FedEx Cup points. Though in 2016, he missed many cuts and was even disqualified from the John Deere Classic for missing the Wednesday Pro-Am.

He finished the season in 173rd losing his tour card. Since then. he has played primarily on the Korn Ferry Tour.

Erik is also the founder of The Erik Compton Foundation. It is a non-profit organization which is dedicated to increasing awareness and advocacy of organ donation by supporting medical-based research, increasing donor education, and the development of youth support programs.

Though it, he shares his story and experiments and spreads awareness of the need for organ donation visiting patients in the hospital. Whether mentoring transplant recipients at home in Miami or hosting youth clinics for local transplant patients at a PGA Tour event, Erik has always provided support and encouragement for the patients and foundation.

During the Master’s Tournament at Augusta, Georgia in April 2009, Compton received the Ben Hogan Award, which is given annually to a golfer who has stayed active in golf despite a physical handicap or serious illness.

In 2012, Erik received the Babe Didrikson Zaharias Courage Award from the U.S. Sports Academy. A year later he was among many distinguished recipients of the Donate Life Champion award.

Erik receives the PGA TOUR Courage Award in the year 2013. This is the award honored to the player for their courage and perseverance who has overcome extraordinary adversity.

Compton was diagnosed with viral cardiomyopathy when he was just 9 yrs old. It is a condition where the heart muscle is inflamed and is unable to pump as hard as it should pump.

And so Erik undergoes two heart transplants due to his medical condition. He has his first transplant in 1992 when he was 12 yrs old and the second taking place in 2008. Both of the surgeries were successful and Erik continues his golf career.

Being one of the successful players, his net worth is said to be $3 million.

The national average salary for a Head Golf Professional is $55,482 in the United States. So, he must have good earning through his career.

An average pro golfer will earn more than $2 million a year and the top-name golfers on tour can earn more than $100 million per year. Erik was also part of the PGA TOUR and receives a huge amount through it.