NBA coach Erik Spoelstra is married and a father of two.

Nikki is a former Miami Heat cheerleader. Their engagement was on September 17, 2015.

Together they have two children.

Their second child daughter was born in December 2019 and her name is not revealed yet. 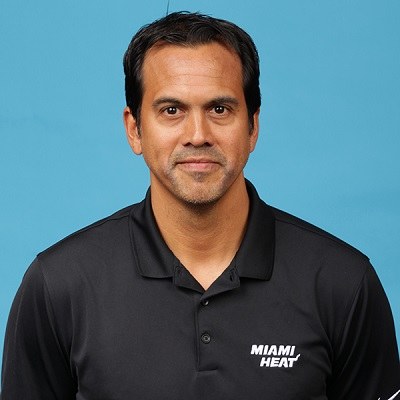 Don’t brush anything under the rug. Don’t point fingers or do the blame game. A team is a family, and we’re in this together.

You have to absolutely commit to whatever your process is and attack that process every single day, of trying to get better, take steps forward, without getting caught up in the immediate results that everybody wants to see. That's probably the biggest challenge.

Who is Erik Spoelstra?

Erik Spoelstra is a professional basketball coach for the Miami Heat team of the National Basketball Association.

He is the first Filipino-American head coach in the NBA and North American professional sports team.

Erik Spoelstra was born Erik Jon Celino Spoelstra on November 1, 1970, in Evanston, Illinois, the U.S to Jon Spoelstra and Elisa Celino. Currnelty, he is 51 years old. His birth sign is Scorpio.

His mother Elisa was from San Pablo, Laguna in the Philippines.

His grandfather’s name is Watson Spoelstra and he is a late Detroit sportswriter.

They shift to Portland, Oregon where he joined Raleigh Hills Elementary and Whitford jr. High School.

Erik graduated from Jesuit High School, in Beaverton, Oregon. While he is in High school, he is exceptionally good at Point guard on the basketball team.

From 1993 to 1995, he was engaged with the German professional basketball club, Tus Herten as a player-assistant coach.

At the end of the second year, he had surgery because of his back problem.

In 1995, Spoelstra was offered a two-year contract by the Tus Hertan but he goes for the NBA’S Miami Heat offer.

First, Spoelstra was working as the Heat’s Video Coordinator. Two years later, he got an opportunity to be an assistant coach as well as a video coordinator.

As an assistant coach, he helps and contributes his strategy to his team. Many players improved their jump shot and point guard.

When he was an assistant coach in Miami Heat, he won the 2006 NBA Finals.

He became the head coach of the Miami Heat in April 2008.

At the beginning of their first year as a head coach, his team had suffered from a huge loss in the previous season.

But in the 2012 NBA Finals, his team Miami Heat won the match against the Oklahoma City Thunder.

In his coaching career, he leads his team to a 27-game winning streak which is the second-longest in NBA history.

Miami Heat reached to 2014 NBA finals but they lose to San Antonio Spurs.

Erik Spoelstra’s net worth as a current head coach of the NBA’s Miami Heat is approximately $10m US. His salary is around $3 m US.

In December 2011, Spoelstra received a $6 million contract from Miami Heat.

Erik has black hair and hazel eyes. His height is 6 feet 2 inches.