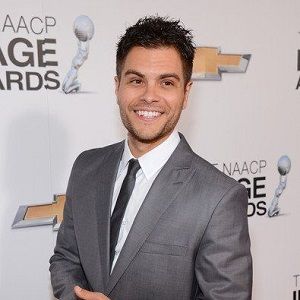 What is the relationship of Erik Valdez?

Erik Valdez got engaged to his girlfriend in 2015.

After a year, he got married to his long-term girlfriend Candice Lopez, a host on Radio Disney.

But his Instagram says that he is a husband.

Then on May 22, 2018, this couple welcomed their first child, a son into the world, They named him Enzo Ray Valdez.

Who is Erik Valdez?

Erik Valdez is an American actor and also a fan of motorsports.

He was seen in films are “Such jarhead 3: The Siege”, “Untitled Horror Comedy,” and others.

Additionally, he is also known for the TV show General Hospital as Trey Mitchell.

His ethnic background traces back to Mexican, Spanish, and Native Americans from his father’s side.

Similarly, from his mother’s side, he belongs to the English and Irish ethnicity.

Furthermore, details about his academics are not disclosed until now.

Erik Valdez acted for the first time at the age of 7 in a theater play. His acting career in TV and films started in 2004.

In 2004, he moved to Los Angeles to pursue acting in television and films.

Recently, in 2016, he featured in two films. He played the characters of ‘Officer Valducci’ and ‘Lopez’ in “Paint It, Black,” and “Jarhead 3: The Siege” respectively. His other acting projects are “Mistresses,” “Graceland,” and “Syndicate.”

This General Hospital famed actor’s net worth is estimated at around $1 million. As a vehicle lover, he owns 47 of them.

Erik is a talented actor. Although he talks about controversial topics on his social media accounts, he doesn’t get involved in any controversies.

He likes to stay away from any controversies and rumors. Therefore, as of now, there are no rumors or criticism regarding his work life.

Also, both his eyes and hair colors are dark brown color.