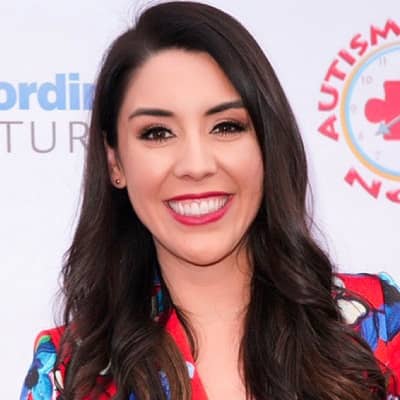 Erika is married to Jock Purtle, Lock is also an Entrepreneur. The couple married on June 22, 2019, at The Ultimate Skybox, San Diego, California.

She has also posted a video proposed by Jock in her Youtube channel in their year anniversary.

Who is Erika De La Cruz?

Erika de la Cruz is an American TV host, author, and media personality. She is a radio host for the KIFM. She is also the official host of the Fashion Week San Diego and is the founder of Passion to Paycheck.

Erika was born on May 7, 1991. There is no information regarding her childhood, family, and siblings.

Erika holds an American nationality and is of Mixed(Spanish and Portuguese)ethnicity.

She graduated with a Film & Fashion degree from San Diego State University.

After college, she worked at Entercom Broadcasting as a marketing director. Securing her position at Fashion Week and the Late Night Show and working with her full efforts, she is now a well-known entrepreneur.

She is a host of Brian Tracy’s Success Mastery Academy and The Lessons From Network Millennial Contributor. Erika is a radio host for the KIFM, easy 98.1, and on-air personality & moderator for previous outlets: NBC, Fox Sports & The CW. She is also the official host of the Fashion Week San Diego and is the founder of Passion to Paycheck.

Furthermore, she is the Founder of Passionistas: Tips Tales & Tweetables from Women Pursuing Their Dreams book, community & coaching.

She is a well known motivational speaker in the Girlboss and Millennial Empowerment Movement. She also works with community organizations such as CWI (Connected Women of Influence) and Susan G. Komen. She is a keynote SUE TALK speaker for the national Women Lead Campaign, encouraging females.

Erika has also nominated as Woman to Watch- Leadership Division by the California State Senate.

She is also an author and writes different books. Her books include the best selling Books like Passionistas, Tips Tales & Tweetables From Women Pursuing Their Dreams. Erika also received the title of Author of Influence 2017 by the California State Senate.

Establishing her self as an Entrepreneur, he owns different companies and has good earning. So her net worth is around million but isn’t disclosed.

Erika is residing now with her husband in their house at West Hollywood, California. She also owns the MazdaCX30 car.

Erika has not been in any sort of rumors and controversies.

There is no exact measurement oh height and weight. Looking at her pictures, we can say that she has a slim built figure. She is a brunette with dark brown colored eyes.