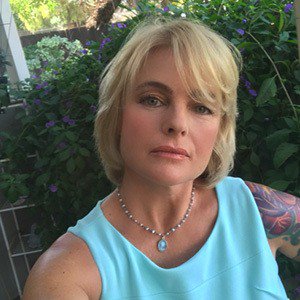 He is in a gunfight right now. I'm gonna have to take a message.

I liked acting early on, and I really liked roles that were meaningful to me, and 'Baywatch' was.

I didn't have a pool growing up, and we went to the beach to lay out and get sun.

Erika Eleniak is currently in a relationship with Roch Daigle. He is a key grip who worked on the set. She had difficulty for commuting to and from Telluride, Colorado and she purchased a home in Calgary where her current boyfriend lived.

In 2005, she became pregnant but later, it was discovered to be ectopic and required emergency surgery, which unfortunately led to a miscarriage. Again she became pregnant and welcomed a daughter, Indyanna Daigle in January 2006 without complications.

Previously, she was engaged to her ‘Baywatch’ co-star Billy Warlock. Later, she married Philip Goglia on May 22, 1988, but they ended with divorce just after six months.

Erika Eleniak is an Amerian-Canadian actress, Playboy Playmate and former model who is best known for her role as Shauni McClain in ‘Baywatch’. She also made her appearances in the films ‘The Bob’, ‘Under Siege’, and ‘The Beverly Hillbillies’.

She was born on September 29, 1969, in Glendale, California. She is currently 49 years old. Her father’s name is Dale Alan Eleniak and her mother’s name is Iris Maya (Neggo) Arnold. Her uncle’s name is Eddie Carroll(born Edward Eleniak) and he was an actor and comedian.

Erika has four sisters and one brother. She bears a resemblance to actress Romy Schneider. She suffered from an eating disorder in the past which led her underweight.

Erika holds American and Canadian citizenship but her ethnicity is a mix of Ukrainian, German, and Estonian.

She made her first feature film debut from the 1982 film ‘E.T. the Extra-Terrestrial’ in which she portrayed the role of the girl kissed by Elliot in the classroom scene. She debuted her film career from the role of Vicki De Soto in the 1988 horror remake ‘The Blob’.

Erika made her appearance in the July 1989 issue of ‘Playboy’ at the age of 19. She portrayed the recurring role on the TV series ‘Charles in Charge’ as Charles’s girlfriend, Stephanie Curtis in the same year. She portrayed the female lead role of Shauni McClain in ‘Baywatch’ from 1989 to 1992. Moreover, she appeared as Jordan Tate, a Playboy Playmate hired to do a striptease for the captain of the U.S. Navy battleship, USS Missouri, in ‘Under Siege’ in 1992.

Likewise, her other notable roles include in ‘A Pyromaniac’s Love Story’ in 1995, ‘Bordello of Blood’, ‘Final Voyage’, ‘The Opponent’, ‘Betrayal’, The Real Gilligan’s Island’ and many more.

In addition, she has been teaching acting since 2012 with the Antonio Sabato Jr. Acting Academy. She is serving as Director and to children in recovery for substance abuse and behavioral issues as a form of therapy.

Erika has been successful in maintaining her celebrity status and has not been involved in any rumors and controversies in her career.

Erika Eleniak has a breathless voice and curvaceous, buxom figure. Also, she has a height of 5 ft. 6 inches and weighs 52 kg. Erika has green eyes and platinum blonde hair.