Erin Cahill is an actress of ‘Power Rangers Time Force’, and ‘How I Met Your Mother’.

Erin Cahill has been married to Welsh-born singer/songwriter Paul Freeman. The couple tied the knot on September 3, 2016. The marriage was held in Cote d’Azur, France.

Erin tweeted that she feels very lucky to be Paul’s wife and to have wonderful people attending her wedding. The couple has not welcomed any child yet and they are spending quality time with each other. 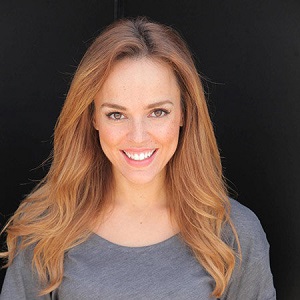 Who is Erin Cahill?

Erin Cahill is a talented American actress and she is famous for her role as Jen Scotts in ‘Power Rangers Time Force’, Heather in ‘How I Met Your Mother’, and Kendra Burke in ‘Saving Grace’.

She was born on January 4, 1980, in Stafford, Virginia, USA. Her birth name is Erin Jessica Cahill and she is currently 42 years old.

She was encouraged by her mother to focus on arts which allowed her to begin with a local high school production at the age of four.

Erin won the Miss Pre-Teen Virginia at the age of 11 and also became the first runner-up for Miss Junior America. She earned perfect scores in all phases of the audition at the Governor’s School for the Arts.

She got selected into the Barton and Williams Dance Company and won many individual awards and company awards.

Erin holds American citizenship but her ethnicity is unknown.

She joined Brooke Point High School and graduated from there in 1998.

She got an academic and performing arts scholarship at Marymount Manhattan College in New York but she had to leave the college at the age of 19 in order to pursue acting full time in Los Angeles.

Erin Cahill made her on-screen debut in the comedic short drama ‘Speed for Thespians in 2000. She made a breakthrough in the role of Jen Scotts in ‘Power Rangers Time Force’.

She was the host for Walt Disney World’s 2006 VACATION Planning Guide DVD.

Alongside co-stars from ‘Power Rangers, she starred in the movie ‘The Order’ in 2017. She has also made her appearance in commercials for Bank of America, Hyundai, Lean Cuisine, Land Rover Discovery Sport, Honda, and many more.

She won Festival Award in the category Best Supporting Actress in a Feature Film for ‘Cut to the Chase’ in 2016.

She must have earned a huge amount for her career however, she has not disclosed any data regarding her net worth, salary, and income. It is still under review.

She was rumored to be in a relationship with British songwriter/singer Seal in 2013. They came to attention after they were seen gazing into each other’s eyes during their attendance at the Silver Circle Gala held at the Beverly Wilshire Four Seasons Hotel.

The rumor turned out to be true but it was not long before they parted away.

She has got dark brown eyes and dark brown hair. And, her body measurement is 34-23-34 inches.

To know more about Dylan Baker, Deanne Bray, and Nancy Giles, please click on the link.