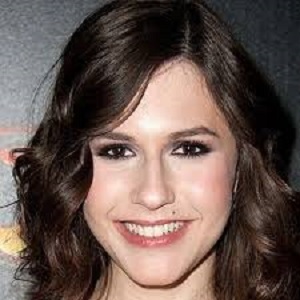 Erin Sanders is no more single as she is dating Adam Johan who is a music artist by profession. The duo started dating since 2016 and both of them seem happy with each other. The couple keeps posting their pictures on their respective Instagram accounts. The couple seems to be spending their life happily.

Who is Erin Sanders?

She was born on January 19, 1991, in Santa Monica, California, USA. Her birth name is Erin Zariah Sanders. She is currently 28 years old. Her father’s name is Mark Sanders(financial planner) and her mother’s name is Katie Silbert-Sandlers(psychiatric social worker). Erin does not have siblings. Her grandfather’s name is Harold Silbert(live radio singer in the 1930s) and her grandmother’s name is Sonia Sanders(portrait artist at Universal Studios).

Erin teaches yoga and is a certified yoga instructor. She is very fond of animals and has worked with dogs, chicken, rats, an alpaca, and bees.

Her other hobbies include swimming, hiking, cycling, and spending time on the beach.

Erin holds American citizenship and her ethnicity is Ashkenazi Jewish.

Taking about her education history, she was a student in high school.

She was discovered by an agent while Girl Scout cookies at the age of 9. She auditioned for the role of Nicole on ‘Zoey 101’(2005) but a separate character, Quinn was created just for her. This role was the start of her ever-growing fan base.

After that role, she portrayed the role of Eden Baldwin, the daughter of Michale Grossman, on CBS’s ‘The Young and the Restless’. After a short period of time, the creator of the Nickelodeon series ‘Big Time Rush’ came to Sanders for the role of Camille Roberts and she returned to Nickelodeon while continuing her work in adult drama.

She has an estimated net worth of around $2 million and she earned that sum of money from her professional career.

There was a rumor that she dated Matthew Underwood in 2008. And the rumor ended after the pair separated in 2010.