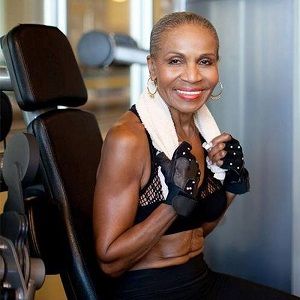 People I know and people I don’t know inspire me to keep going. They tell me how I’m helping them, and that was what my sister’s and my dream was. So as long as I have breath in my body, that’s what I want to do.

Ernestine Shepherd is a married woman. She is married to Collin Shepherd. They have been married for over 557years.

He is very supportive and supports her healthy lifestyle. Similarly, he often assists her with shopping and food preparation. They are a happy couple and live together happily.

Regarding children, this couple doesn’t have any biological kids. However, they have an adopted daughter (Theresa Royal Brown) which is mentioned on Ernestine’s Twitter post of 16 March 2016.

Who is Ernestine Shepherd?

Ernestine Shepherd is an American bodybuilder famous for being the oldest competitive female bodybuilder in the world. She was declared as Guinness Book of World Records in 2010.

She was born on 16th June 1936 in Baltimore, MD. There is no information about her parents. Her sister’s name was Mildred Blackwell who died in 1992 due to a brain aneurysm.

Talking about his education, it is known that she was exempt from physical education at school due to an injury from a car accident.

Ernestine Shepherd was a model in Baltimore for years. When she was at the age of 56 she and her sister Mildred Blackwell went to try on swimsuits. They found their bodies were out of shape and they then started taking aerobics classes. She started competing under the name Ernie.

Likewise, at the age of 56, she has won two bodybuilding titles, as well as run nine marathons. Similarly, she also leads exercise classes for seniors at the Union Memorial United Methodist Church in Baltimore.

There she works as a personal trainer. Furthermore, she published a book named Determined, Dedicated, Disciplined To Be Fit in 2016.

She was declared as the World’s Oldest Performing Female Bodybuilder by the Guinness Book of World Records in 2010. Similarly, she received the Outstanding Fitness Award at the 3rd Annual Senior Awards.

She might earn a huge amount of money from her career but she has not revealed her net worth, income, and salary.

Ernestine Shepherd likes to keep her life away from the media. She has not been to any big rumors and controversy yet.

Talking about Ernestine Shepherd’s body measurements, she has a decent height of 5 feet 5 inches and weighs around 59 kg.

Similarly, she has salt and pepper hair color and black eyes.

You may also like to read Jeff Cavaliere, Warren Cuccurullo, and Nicole Bass.

The sneak peak of the show “Little Big Shots: Forever Young” seem to be more exciting and enthusiastic! Find out about the extremely talented senior citizens!