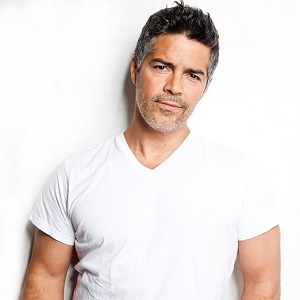 I went jogging up on Mulholland. In the middle of my run I had some form of asthma attack and couldn't even walk. I couldn't get a ride one block to my house. I thought I was going to die

All I would say to people who doubt 'Caprica' is: Everything good starts slow

We as Americans of Latin descent are just as American as anyone else of any other descent.

What is the relationship of Esai Morales?

Esai Morales’s personal life is as successful as his professional career.

He is a happily married man since 2010. He is married to his long-time girlfriend Elvimar Silva. They were in a relationship for a long period of time but no further information regarding their dating history could be found.

The couple got married on May 20, 2010. They together have a beautiful daughter named Mariana Oliveira Morales. They are living a happy luxurious life with their daughter.

He says that his relationship with his wife is based on mutual understanding and he loves her very much. There is no sign of divorce at all. Esai considers his wife a major source of his inspiration.

Who is Esai Morales?

Esai Morales is an American actor famous for his role as Bob Morales in the 1987 biopic La Bamba. He is also best known as Lt. Tony Rodriguez on the American TV drama series NYPD Blue (1993-2005). He played a remarkable role as Joseph Adama in the science fiction television series Caprica (2009-2010).

Esai Morales was born Esai Manuel Morales, Jr. in Brooklyn, New York. His ethnicity is Puerto Rican and his nationality is American.

He is the son of Iris Margarita Morales, a union activist, and Esai Morales, a welder. His parents divorced when he was a child. There is no further information about his parents and family.

He attended the High School of Performing Arts in Manhattan. He was interested in acting from an early age.

Esai began his acting career in a theater in New York at the age of 19. While working in theaters in New York, he also worked on a few Television shows. He made his screen debut with the 1982 film Forty Deuce in which he appeared as Mitchell. His first major role was in the film Bad Boys (1983) in which he played the role of Paco Moreno.

In 1986, he appeared in the movies On Wings of Eagles and Rainy Day Friends. In 1987, he appeared as Bob Morales in the biopic La Bamba. His performance in the movie The Disappearance of Garcia Lorca (1997) and Southern Cross (1999) was highly appreciated and his talent was noticed by the audience and producers. He got a bigger role in the movie In The Army Now (1994) and became more popular. He appeared in the film Dogwatch (1996) in which he played a police officer.

Esai made his television debut in 1984 playing Miguel Rados in an episode of ABC Afterschool Special. Since then, he has speared in several TV series and films. He won the Alma Award-Outstanding Actor in a Television Series for his performance in NYPD Blue.

Similarly, he was nominated for Prism Award and Imagen Foundation Award-Best Actor in a supporting role for his role as Esteban Gonzalez in American Family (2002). He has appeared in guest roles and regular roles in several TV series.

Talking about movies, he has appeared in more than fifty films till now. In 2015, he was nominated for Imagen Foundation Award-Best Supporting Actor for his role as Mr. Santillan in Spare Parts (2015).

Esai Morales has neither been involved in any controversy nor rumor stories till now. He has a clean image in the industry. He is always focused on his work and he has never been criticized for any of his works. There is no rumor of him being in extra-marital affairs at all.

Esai has a height of 5 feet 10 inches. His body weight is not known. His hair color is black and his eye color is dark brown.