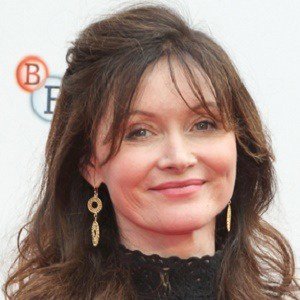 I've had really a great choice of roles that have been very different from one another. And I think I kind of set out to do that when I began my career - to aim to never play the same thing twice.

Sometimes it's easy to do brave things in front of a thousand people, but it's hard to do them in front of a handful. It feels so much more exposing.

I honestly do think that every character - you pick up the things, little things that you like about them in your life. Especially if you play a character for a long time.

Essie Davis is a married woman. She has been married to Australian director and screenwriter Justin Kurzel in 2002. The pair dated for seven years before they tied their knot. The couple has welcomed two children: twin daughters Stella Kurzel and Ruby Kurzel in 2006.

Who is Essie Davis?

Essie Davis is an Australian actress who is best known for her role as Phryne Fisher in ‘Miss Fisher’s Murder Mysteries’. Also, she is well recognized for her role as Amelia Vanek in ‘The Babadook’.

She was born on January 7, 1970, in Hobart, Tasmania, Australia. Her birth name is Esther Davis and she is currently 49 years old. Her father’s name is George Davis and her mother’s name is Mary Davis. She has got six siblings.

Essie holds Australian citizenship but her ethnicity is unknown.

She attended the Clarence High School and later joined Rosny College after graduating high school. Later, she enrolled at the University of Tasmania and National Institute of Dramatic Art in  Sydney and graduated with a degree in Performing Arts in 1992.

She debuted her film career from the role of Jill in ‘The Custodian’ in 1993 and later appeared the film ‘Dad and Dave: On Our Selection’ in which she portrayed the role of Kate Rudd. In addition, she appeared in hit films such as ‘The Matrix Reloaded’, ‘The Matrix Revolutions’, ‘The Sound of One Hand Clapping’ and many more.

She has worked alongside several famous artists such as Leo McKern, Joan Sutherland, and Geoffrey Rush.

She has an estimated net worth of around $2 million and she has earned that sum of money from her professional career. However, her salary and income are under review.

She has been successful in keeping her professional life far from rumors and controversies.

Essie Davis likes to keep her profile low and she does not seem to be active on social networking sites such as Facebook, Instagram, Twitter, etc.