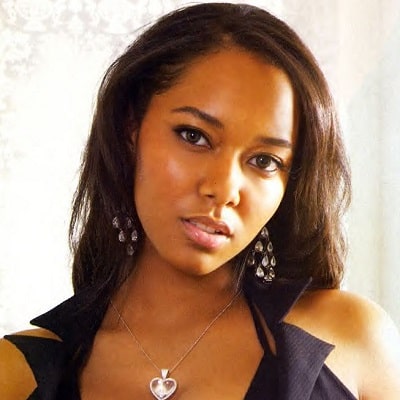 Also, she has one son, Cayden from her another relationship. She took a two-year break to stay at home and raise her only son from her past affair. However, she still hasn’t confirmed who the father of her son is.

In 2011, Esther was in a relationship with a retired American rapper, Joe Budden. There’s not much information on how they met or how long they dated, but in 2011, there was a problem in their relationship.

Baxter claimed that he assaulted her. She also accused Joe of physical abuse that caused her miscarriage when she was pregnant with a daughter.

Besides her relationship with Joe, Esther Baxter’s affair with Shad Gregory Moss, who is professionally known as Bow Wow, also gained the attention of the media.

The controversy between Esther and Shad started when the rapper made statements stating that he lost his virginity to Esther at the age of 16.

After this, Esther tweeted a reply denying his confession.

Who is Esther Baxter?

Esther Baxter is an American model and actress. She first appeared in a music video for Petey Pablo’s single Freek-A-Leek in 2004.

She was born in Miami, Florida, in the United States on September 24, 1984. She grew up along with her brother. The names of her parents and her brother are kept secret.

Esther holds American citizenship and her ethnicity is Afro-American. her academics are also not disclosed.

Initially, Esther Baxter never wanted to be a model but her brother is the main culprit for her entry into the jet-set since he insisted on her meeting with a modeling agent.

She came into recognition in 2004 when she featured in the music video for Petey Pablo’s single Freek-A-Leek” Due to her beauty, she was later hired by many huge artists.

After that, she made her appearances in several music videos like Ludacris‘s Number One Spot, Will Smith‘s Switch, Nelly‘s Shake Ya Tailfeather, and Kanye West‘s The New Workout Plan. Not only that, but she has also shown up in some other magazines like Smooth, VIBE, King, and XXL.

Furthermore, she has been dubbed Miss Freek a Leek due to her appearance in Petey Pablo’s video. In August 2007, she retired from modeling and video shoots to go to college.

Esther also managed to get on the cover of King’s September/October 2011 issue. In an interview, she revealed about going from modeling to acting.

Baxter has amassed an estimated net worth of around $1.5 million from her career as a model and actress.

Esther Baxter has a curvy body with a height of 5 feet 7 inches and weighs about 59 kg. She has stunning green eyes and dark brown hair.

To know more about Alexandra Richards, Bria Murphy, and Hilary Rhoda, please click on the link.