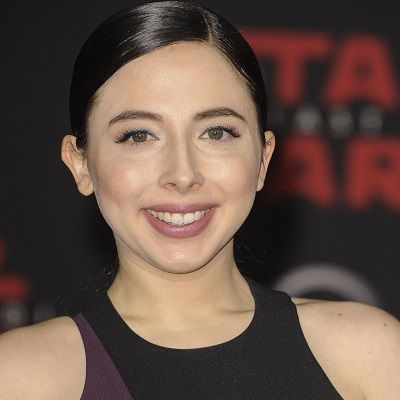 Esther Povitsky is possibly single. She has not disclosed her past relationship as well.

She is an animal lover and uploads her dog’s picture on Instagram.

Esther Povitsky is an American actress and comedian known for the comedy series Alone Together. Esther is a writer and producer as well.

Recently, in 2019, she appeared as Izzy in Dollface.

Esther Lauren Povitsky was born on 2nd March 1988 in Skokie, Illinois. Her paternal grandparents are Abe Povitsky and Esther Klein. She is the maternal granddaughter of Richard Arlen Arneson and Eileen Joanne Benson.

In the year 2006, she graduated from Niles North High School in Skokie, Illinois. Esther moved to Los Angeles to pursue a career in stand-up comedy. She attended the University of Illinois at Urbana-Champaign in Illinois.

Likewise, she studied comedy at iO Chicago, The Second City, and The Groundlings.

In the year 2008, she appeared as Modell Teen in The Express: The Ernie Davis Story.  After that, she has appeared in Jimmy Kimmel Live!

She also played as Nicole in All in All, Sandy in The Eater, Krystal in New Girl and others.

In 2012, Esther played Babysitter in Daddy Knows Best. Similarly, she played Julie in Parks and Recreation, Phone Girl in Pound House, Hope in Hope & Randy, Cassie in Key and Peele.

Some of her recent roles are in Barely Famous, Hot Girl Walks By, Difficult People, What a Nice Party, Workaholics, Lady Dynamite, The Amazing Gayl Pile, Brooklyn Nine-Nine, City Girl, The Story of Our Times, Dude, Alone Together, Crazy Ex-Girlfriend and Dollface.

She is going to appear as Shirley Temple in the Scroll Wheel of Time.

As a writer, she has worked in Alone Together, Last Comic Standing, Cocktales with Little Esther, and The USB Show.

Her producer credit includes in Alone Together and Cocktales with Little Esther.

Esther has not been part of any big rumors and controversy so far.

Esther has black hair and grey eyes. She is 5 feet tall and weighs around 51 kg.