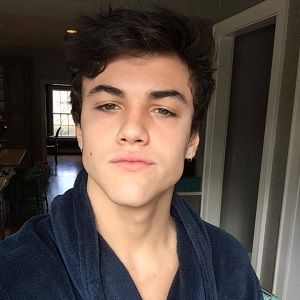 Ethan was in a relationship with Meredith Mickelson. In 2015, there was a rumor that the couple started dating each other. However, they couldn’t handle their relationship for too long and split up in several months. The beautiful couple never spoke about their relationship in the public and media. Apart from her, Ethan has never been in a relationship. There is not any rumor of affair and girlfriend of him Currently, Ethan is single.

Who is Ethan Dolan?

Ethan Dolan is an American social media personality. He along with his twin brother Grayson Dolan, have been posting many videos on YouTube and Vine. The twin brother has more than 4.4 million followers on YouTube. Besides this, he is also a competitive wrestler who has won a wrestling tournament at the Madison Square Garden.

In addition, Ethan and Grayson have also won the awards for Choice Web Star: Male and Choice YouTuber.

Ethan was born on December 16, 1999, in New Jersey, United States. He is the son of Lisa Dolan and Sean Dolan. Furthermore, Ethan has two siblings, a twin brother Grayson Dolan and an elder sister Cameron Dolan.

He grew up in his hometown along with his siblings and parents. Concerning in his education, there is not any information available regarding it.

Ethan began his career by posting a video with his twin brother Grayson on Vine. Soon after that, the duo came into the spotlight. The popular twin has almost 7 million followers on Vine and more than 4.4 million followers on YouTube. Moreover, he is also a social media personality.

His most popular videos include Ethan Gets His Wisdom Teeth Removed, Never Have I Ever, Roasting each other, and much more. Besides this, he is also a competitive wrestler.

In addition, this handsome has also won a wrestling tournament at the Madison Square Garden. The twins have been collaborating many videos alongside Kenny Holland, Amanda Cerny, Jack Dail, Jake Paul, and much more.

Being a social media star and model, Ethan earns a handsome amount of money from his profession. Currently, he has a net worth of $1 million. So far, Ethan along with his brother Grayson has won a couple of awards which include Choice Web Star: Male and Choice YouTuber.

Once, there was a rumor that Ethan and Grayson kicked out Nate Garner from their tour. However, the Dolan twins later clarified that he had in a fight with fellow tour-mate Alex Aiono. Apart from that, he has never faced any controversy.

Perfect body with a towering height of 5 ft 11 inches, Ethan weighs 73kg. Furthermore, he has beautiful brown hair and black hair. In addition, his chest, arms, and waist measure at 40 inches, 14 inches, and 32 inches respectively.

The Dolan Twins request their die-hard fans to stay away from their father’s New Jersey funeral! Know the reason why?