He married actress Uma Thurman on 1 May 1998 after they met on the sets of ‘Gattaca’ in 1996. The pair has two children together, daughter Maya and son Levon. They later separated on 20 July 2004.

In 2003, Hawke had a brief relationship with the Canadian model Jennifer Perzow. Currently, he is married to the nanny of his kids Ryan Shawhughes.

The couple married on 18 June 2008 and have been together ever since. They have two daughters from this marriage: Clementine Jane and Indiana. 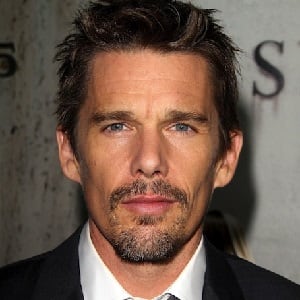 I think most people are good at more things than the world gives them the opportunity to do.

But the truth is, I've never wanted to be a movie star - and I've been pretty clear about that.

A lot of American actors when they do Shakespeare put on a phoney English accent and it drives me crazy. You're always fighting against the idea that only the British know how to do Shakespeare.

Who is Ethan Hawke?

People mostly know him for his roles in movies including ‘Before Sunrise’, ‘Training Day’, ‘Gattaca’, ‘Assault on Precinct 13’, and ‘First Reformed.’

His father was an insurance actuary and his mother was a charity worker. After his parent’s divorce in 1974, Hawke was raised by his mother. He developed a keen interest in acting like a child.

He is of American nationality. Furthermore, he belongs to a mixed ethnic background of English, Scottish, Scots-Irish, Northern Irish, and German.

Later, he studied acting at Carnegie Mellon University in Pittsburgh and also attended New York University. However, he dropped out of NYU to pursue a career in acting.

Ethan Hawke initially appeared in the movie ‘Explorers’ as Ben Crandall in 1985. In 1989, he also had a small role as Chris in ‘Lion’s Den’.

Additionally, in the same year, he also appeared in ‘Dead Poets Society’ and ‘Dad’. Hawke played the role of Jack in ‘White Fang and Tom McHugh in ‘Mystery Date’.

He appeared as Sgt. Will Knott in the movie ‘A Midnight Clear.’ In 1992, he had roles in ‘Waterland’ and ‘Rich in Love.’

Since then, he has appeared in several other movies and television series. At present, he has more than 70 credits as an actor.

Some other movies and television series that Hawke has appeared in are ‘Stockholm’, ‘Sandra’, ‘Blaze’, ‘Valerian and the City of a Thousand Planets, ‘The Magnificent Seven’, ‘The Phenom’, ‘Regression’, ‘Good Kill’, ‘Predestination’, ‘The Purge’, ‘Total Recall’, ‘Moby Dick’, ‘Little New York’, ‘New York, I Love You’, ‘Fast Food Nation’, ‘Assault on Precinct 13’, ‘The Jimmy Show’, ‘Waking Life’, ‘Snow Falling on Cedars’, ‘Great Expectations, and ‘Floundering’ among others.

This actor has not revealed his current salary. However, he has an estimated net worth of around $55 million at present.

Hawke made the news recently after he revealed that his personal life fell apart after his divorce from Uma Thurman.

In addition, he also received criticisms when he commented that superhero movies are overrated.

At present, there are no rumors concerning Hawke and his career.