Ethan Zohn is a motivational speaker who was once a soccer player.

Ethan is currently married to his wife, interior designer Lisa Heywood. The two dated for a while and eventually got engaged in 2015. And soon after, they got married on the 16th of July 2016 in North Bennington, Vermont. The couple has been living a happy married life ever since.

He also dated fellow Survivor winner Jenna Morasca. Though they were platonic friends at first, they started dating eventually and were inseparable. The two appeared in several reality TV shows together and advocated for several issues as a couple. Sadly, the two broke up in February 2013 but are still good friends with each other. 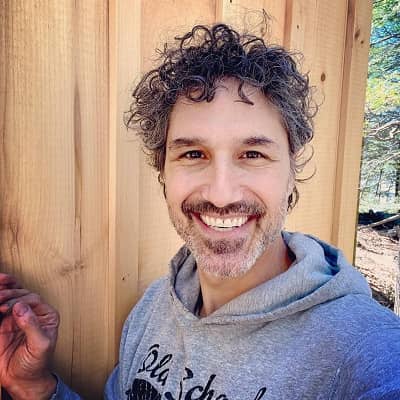 Who is Ethan Zohn?

Most recently, he appeared in 2020’s Survivor: Winners at War but was eliminated and ended up in 18th place.

Ethan Zohn was born on the 12th of November, 1973 in Lexington, Massachusetts, U.S.A. As of now, his age is 47. His nationality is American and his ethnicity is Jewish.

Ethan was born to parents Aaron Zohn (father) and Rochelle Zohn (mother). Ethan also shared that he lost his father at the young age of 13 to cancer. He was raised by his mother after that and so, he is really close to her.

Ethan grew up in the U.S. along with his two brothers, Lenard and Lee. He was also passionate about soccer at this time and really polished his skills growing up.

Talking about his education, Ethan attended Vassar College in New York. He played a lot of soccer as the goalkeeper of the college team during his years at Vassar. And after 4 years, Ethan graduated from Vassar in 1996 with a B.A. in biology.

After his graduation, Ethan played as a goalkeeper for several clubs such as Highlanders F.C., Cape Cod Crusaders, and the Hawaii Tsunami. And while he could have continued with professional football as a career, he only played for 3 years, from 1997-2000. After this, he went on Survivor: Africa as a contestant. Ethan went on to win the whole thing with first place and received a million dollars as the grand prize. He put this money to good use as the co-founder of Grassroot Soccer, a foundation that uses soccer to raise awareness about HIV/AIDS in Africa.

Ethan has also appeared on several other reality TV shows such as Fear Factor and The Amazing Race. He also returned to Survivor 2 times for Survivor: All Stars and Survivor: Winners At War. These times though, he didn’t finish first but rather 11th and 18th place respectively. Ethan has been an inspirational figure to many due to his determination, good nature, and honesty. His work in spreading awareness about the environment, AIDS, and other pressing issues has made him an influential figure as well. He even overcame a rare form of cancer, Hodgkin’s lymphoma after fighting against the disease for many years.

He has received the Courage of Conscience Award from The Peace Abbey for his combined efforts in educating and spreading awareness about HIV throughout Africa.

Ethan has not shared official information regarding his net worth or salary as of now. But many estimate his current net worth to be roughly 2 million U.S. dollars as of now.

Ethan has not shared his exact height or weight as of now. Even so, we can see from his photo that he stands at a decent height and has a balanced weight with an athletic physique. He has curly brown hair and black eyes.

Also, get to know more about similar personalities such as Rob Mariano, Amber Brkich, and Grany Mattos.