Ethel Skakel met Robert F. Kennedy during a ski trip to Mont Tremblant Resort in Quebec in December 1945. During this time, Robert was dating Ethel’s elder sister, Patrice. Patrice and Robert broke up and Robert started dating Ethel. They dated for five years and in February 1950, the duo became engaged.

On June 17, 1950, the couple got married at St. Mary’s Catholic Church in Greenwich, Connecticut.

Ethel became a widow after Robert was shot and died in 1968. After his death, Ethel publicly announced she wouldn’t marry anyone else. 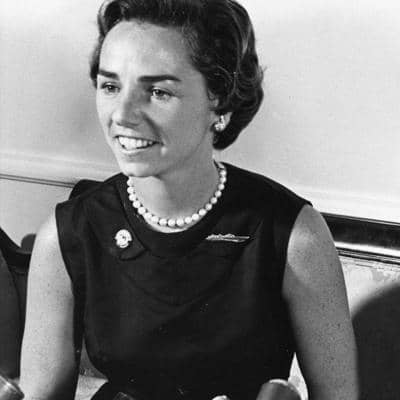 Who is Ethel Kennedy?

Ethel Kennedy was born on 11th April 1928. As of 2021, Ethel is 93 years old. By birth, her name was Ethel Skakel.  She was born in Chicago, Illinois to George Skakel and Ann Brannack. Her father, George Skakel, was an American businessman and the founder of Great Lakes Carbon Corporation. Ethel’s parents died in a 1955 plane crash.

Ethel is the third of four daughters and the sixth child of seven. Georgeann, James, George Jr., Rushton, Patricia, and Ann are her siblings. In 1945, She graduated from the Convent of the Sacred Heart in Manhattan.

Ethel began her college education at Manhattanville College in September 1945. There she met her soon-to-be sister-in-law, Jean Kennedy. She first met Jean’s brother, Robert, during a ski trip to Mont Tremblant Resort in December 1945. During this trip, Robert started dating Ethel’s elder sister, Patricia. After the relationship ended, Ethel and Robert started dating.

Ethel campaign for Robert’s elder brother, John F. Kennedy, in his 1946 campaign for the United States Congress. She received a bachelor’s degree from Manhattanville in 1949.

Ethel was a human rights advocate. During the 1950s, Robert worked for the federal government in investigatory roles for the US Senate as a counsel. President Kennedy assigned Robert and Ethel to tour fourteen countries within a 28-days trip in 1952.

After President Kennedy’s assassination in 1963, Ethel encouraged her husband to enter the Democratic primary for the 1968 presidential election. In 1968, she and Robert founded the Center for Justice and Human Rights.

Still today, Ethel stands for democracy and human rights. She among hundreds marched near the home of Wendy’s chairman Belson Peltz to convince the company to pay an additional one cent per pound of tomatoes to increase the wages of field workers in 2016.

A bridge over the Anacostia River was named after Ethel in recognition of her advocacy for environmentalism and social cause in Columbia in 2014. It is called Ethel Kenndey Bridge.

The same year, President Obama awarded her with Presidential Medal of Freedom for her dedication to “advancing social justice, human rights, and poverty reduction by creating countless ripples of hope to effect change around the world”.

Ethel dedicated her life to human rights to lower-class people. According to various sources, Ethel estimated net worth is around $50 million. Information about her assets and salary is not available.

Ethel is around 5feet and 6inches tall and weighs around 65kg. Ethel has brown eyes and brown hair.