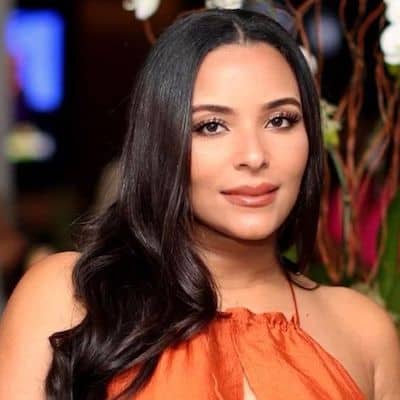 Eudoxie Mbouguiengue is currently married. She exchanged vows with Ludacris on 27 Dec 2014. Her husband is a popular rapper and the way of his proposal was amazing.

Ludacris a day after Christmas in 2014 proposed to his longtime girlfriend via a private plane in Costa Rica. The main question was painted on the ground in blue. It also had a cute heart at the end and he used lights to highlight it.

Eudoxie’s excitement was sky high which can be seen on her IG post. After a day, they exchanged vows too. The groom bought the dress for the bride that was sleeveless. This lovely couple met each other in 2009 at a charity but started to date in 2009.

From this conjugal relationship, they are blessed with a child. Their daughter, Cadence Gaelle Bridges was born in May 2015.

Recently, Eudoxie celebrated her 35th birthday and on the occasion, she revealed that she is pregnant with her second child. This news was shared via her Instagram account.

Eudoxie Mbouguiengue is a Gabonese model and philanthropist. She has founded an organization named Unspoken Angels Foundation to help needy women.

The public noticed her for being the wife of rapper Ludacris.

She was born on 14 May 1986 and her birthplace Gabon. The name of her mother is Jermaine Agnan but her father’s identity is unknown.

Her childhood was a struggle as she had to grow up in poverty. She had to left her birthplace because of sexual abuse during the teenage.

Eudoxie’s ancestry is Gabonese and has seven half brothers & sisters. Her younger sister’s name is Christella Nso.

As per her academics, she completed her bachelor’s and masters from the University of Miami.

There is nothing much about Eudoxie Mbouguiengue’s work life. She is a fitness model plus an Instagram star. As a model, she worked with Dior, Ok, Essence, Musictory, and Time magazines.

Also, she is an active Philanthropist and helps women who are sexually or verbally abused. She also supports mentally challenged girls in the USA and West Africa.

With her founded organization, Unspoken Angels Foundation she educates the public on various social issues. This international non-governmental organization was established in the year 2014.

At present, she collected an estimated net worth of around $1 million US. However, her salary and other earnings are unknown.

Her musical artist husband’s financial worth is around $25 million.

This rapper’s wife is keeping herself away from rumors and is also not surrounded by any desperate scandals.

But in the past, she was accused of getting her butt bigger. In her defense, she posted her past and present pictures and said her butt was always big.

Regarding Eudoxie Mbouguiengue’s body features, her height and her body weight are of average size.

In addition, her eyes are dark brown plus her hair color is black. She has a medium skin complexion.