Eugene Levy is a Canadian actor, comedian, producer, director, and writer. He is also well known for works such as the American Pie series of movies and the sitcom Schitt's Creek.

Eugene Levy is a married man. He is married to Deborah Divine. The pair later married in 1977. He and his wife have two children from this relationship, son Daniel Levy and daughter Sarah Levy.

Levy’s marriage is going strong as there is no news regarding any extramarital affairs at present. 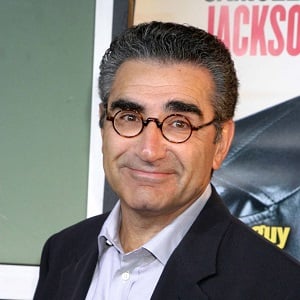 I can't do comedy that is cutting and vicious. If I knew I'd said something that was going to make someone feel bad, well, that supersedes everything.

One of the biggest misconceptions about me is that I'm a comedian, which I'm not. A comedian is someone who can stand up in front of an audience and make you laugh. I've never done stand-up and I never will. I'm a comic actor. My comedy comes through my characters.

At the end of the day, even if my part is a bit goofy, the key thing is that I'm doing what I love to do, and that's to make people laugh.

Who is Eugene Levy?

Eugene Levy is a Canadian actor, producer, writer, and comedian. People mostly know Eugene Levy for his role as Noah Levenstein in the ‘American Pie’ films.

Additionally, he has appeared in several other movies and television series including ‘Schitt’s Creek’, ‘Package Deal’, and ‘Hitched’.

Levy was born in Hamilton, Canada on December 17, 1946. He was born to a Jewish family. His father was a foreman at an automobile plant and his mother was a housewife.

He developed an interest in the world of acting since his childhood years. He is of Canadian nationality. Furthermore, he belongs to the mixed ethnic background of Sephardi Jewish and Ashkenazi Jewish.

Eugene Levy initially appeared in several small roles in movies like ‘Foxy Lady’ and ‘Cannibal Girls’. He also had a role in the TV series ‘The Sunshine Hour’. In 1979, he appeared as Fred Wexelblatt in ‘The Lovebirds’. Additionally, he also played Bernie / Freddie Cohen in two episodes of ‘King of Kensington’.

Some other movies and television series that Levy has appeared in are ‘Working the Engels’, ‘Madea’s Witness Protection’, ‘Goon’, ‘A Ted Named Gooby’, ‘For Your Consideration’, ‘The Man’, ‘Greg the Bunny’, ‘New York Minute’, ‘Dumb and Dumberer: When Harry Met Lloyd’, ‘Bringing Down the House’, ‘Like Mike’, ‘Down to Earth’, ‘The Ladies Man’, ‘The Secret Life of Girls’, ‘Almost Heroes’, ‘Hiller and Diller’, ‘The Drew Carey Show’, and ‘Multiplicity’ among others.

Levy has won two Primetime Emmy Awards. In addition, he has also won the Movies for Grownups Award and Sir Peter Ustinov Award.

Some other awards that he has won in his career as of yet are Blockbuster Entertainment Award, Critics Choice Award, Canadian Comedy Award, Canadian Screen Award, and FFCC Award among others.

He received Canada’s highest honor in the performing arts, Governor General’s Performing Arts Award in 2008. Levy has not revealed his current salary. However, he has an estimated net worth of around $ 18 million at present.

Although Levy has spent a large part of his career in show business, he has not been part of any notable controversies individually.

Some of his movie roles have been criticized over the years but it is nothing new in Hollywood. At present, there are no rumors concerning his life and career.

Talking about his body measurement, Eugene Levy has a height of 5 feet 10 inches and a weight of 76kg. Additionally, his hair color is black/grey and his eye color is dark brown.

Levy is active on Twitter. He has over 45k followers. However, he is not active on any other sites and he does not have his official Instagram and Facebook accounts.