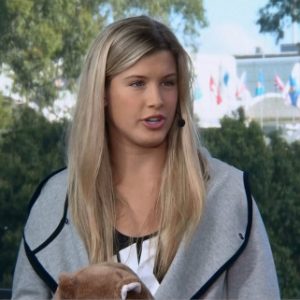 I've learned that it's not a straight road to the top, and there are going to be setbacks along the way. You have to be patient, and you have to keep believing in what you're doing. And keep believing in yourself, no matter what is happening. And then eventually you'll get there.

I love going to the beach and swimming in the ocean. I think it's so relaxing. It's also a great form of active recovery. It's perfect for those rest days when you still want to move a little bit.

I'm very hard on myself. Sometimes too hard on myself. When I lost in the Wimbledon finals, I was so sad, I cried. I had the runner-up trophy! It's still a great accomplishment, but I was so mad.

Talking about her personal life, she is in a relationship with a quarterback, Mason Rudolph. Her boyfriend plays for Pittsburg Steelers. There were dating rumors of them from mid-2020. In Valentine’s 2021, the couple made their relationship official.

Prior, she dated John Goehrke. He is said to be her fan. The couple started having an affair with him since February 2017. Later, they broke up.

Also, in 2013, there were rumors of her having an affair with Alex Galchenyuk. He is an ice hockey player. However, the couple split.

Who is Eugenie Bouchard?

Beautiful Eugenie Bouchard is a Canadian professional tennis player. She is currently ranked no. 59 in the world. She gained a lot of attention for being the first Canadian player to represent and reach the final of the 2014 Wimbledon Championships.

Moreover, she earned WTA Newcomer of the Year for her incredible performances in the year 2013.

She was born on February 25, 1994, in Montreal, Quebec, Canada, and grew up in the same place. Her nationality is Canadian and her ethnicity is mixed(French-Canadian, Irish, Scottish, and English).

Her parents, Michel Bouchard and Julie Leclair introduced her to tennis while she was at the age of 5. She was brought up alongside her fraternal twin and two younger brothers. Eventually, she later did very well in tennis and is a world-class player right now.

In the same way, she attended The Study School in Westmount. Not only she excelled in tennis, but she was also exceptional in mathematics and science. However, there is no information about her later education.

Eugenie initiated her career in 2005 by competing in the tournament Open Super 12 when she was 12 years old. Soon, her abilities secured her the ITF in 2008. Following year, she astonished everybody in Toronto by beating Quebecer Marianne Jodoin to earn the Canadian Under-18 Indoor.

However, Eugenie Bouchard couldn’t make it past the semi-finals of the Australian Open singles junior event by losing to Monica Puig.

Later on, she fiercely fought Zheng Saisai in the final to win her first professional title at the ITF $25,000 Burnie International. In the Australian Open in 2014, she secured career-defining victory over former world no. 1, Ana Ivanovic.

However, she couldn’t make it past Li Na at the semifinals. Although her defeat, she made it in the top 20 in world rankings.

Moreover, she won the finals of the WTA singles title by beating Karolina Pliskova. Later, she reached the semifinals of the French Open but couldn’t proceed any further. Unfortunately, she suffered an injury while playing in the US Open in 2015. In 2017, she competed at Brisbane International but couldn’t make it past Shelby Rogers in the first round.

Her net worth is $6 million but her salary is not revealed yet. She was under the world’s highest-paid female athletes list in 2017. Further, she was ranked ninth.

During her entire career, she has always maintained top-notch professionalism over her work. Her work is always admirable and her hard work reflects on how well she is doing in her career. She always has maintained a decent and admirable image in her entire career without attracting any rumors and controversy.

Instead of attracting unwanted attention, she has worked day and night to achieve her dream and make every believe that she has no interest in becoming a controversial figure.

Eugenie Bouchard has an athletic body structure with a decent height of 5 feet 10 inches and a weight of 63 kg matching her body. To be exact, her body measurement is 36-27-35 inches and her bra size is 34B. Her hair color is golden brown and her eye color is hazel. She wears a shoe size of 7.5(US)