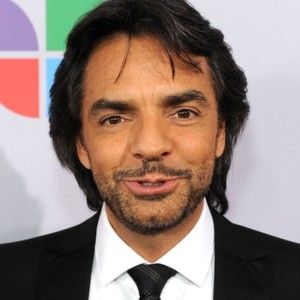 I'm just trying the American dream. To work here in the U.S., you have to commit and be here. For many years, it was back and forth, back and forth, and it didn't work. But I'm always open to working in Spanish

It's not easy to direct in another language, especially comedy

Who doesn't want to have a yacht? But I would prefer to invest my money in something else. But I love them. I just wouldn't buy one unless I had a lot, a lot of money.

Eugenio Derbez was dating Silvana Prince. She is one of the actresses. Their relationship runs during the late 80s or the early 90s. Silvana also gave birth to their son, Vadhir Derbez in February 1991. Vadhir is now one of the Mexican actor and singer. But Eugenio and Silvana got separated.

Eugenio after that started to date Mexican actress Victoria Ruffo in 1992. Their relationship to the next level when they married in 1992. The same year, she gave birth to their son, José Eduardo Derbez. They called time on their relationship in 1996 and the divorce was finalized in 1997.

The actor started dating actress Dalilah Polanco in 2003. Their relationship lasted for about 3 years before she released a public statement in October 2006 to confirm that they were no longer together.

Various rumors were spread of Derbez dating singer Alessandra Rosaldo. After the rumor, a picture was viral kissing by the Mexican tabloids. It proves that there was something going on between them. After some, they made their relationship public.

They married in a lavish wedding ceremony in July 2012. In August 2014, she gave birth to a baby girl, Aitana.

Who is Eugenio Derbez?

Eugenio Derbez is a popular Mexican actor, comedian, and filmmaker. The actor is famous for playing the lead role in the comedy-drama movie, Instructions Not Included.

The movie was the first Spanish-language movie to earn $44 million in the US and $99 million worldwide in box office collections. Eugenio also appears in the popular TV shows such as XHDRBZ, Vecinos, Derbez en Cuando, and La Familia P. Luche.

Derbez was born on September 02, 1961, in Milpa Alta, Mexico. Currently, he is 60 years old. His father’s name is Eugenio González Salas who is a Publicist. And the mother’s name is Silvia Derbez who is an Actress.

Eugenio uses to go Mexican Institute of Cinematography and Theater. He graduates with a degree in film directing. The actor then graduated from Televisa Acting School with an acting degree. He has also taken dance, singing, and music classes.

Mexican star actor Eugenio Derbez is renowned for creating shows like Vecinos and XDHRBZ. From an early age, he decided to build a career in acting. At the age of 12, he was featured in a telenovela as an extra. After completion of his schooling, he joined an acting class and worked in theatres from the age of 19. He kept on working in the theatres until he landed some significant meaningful roles in Mexican shows.
Soon, he landed regular roles in shows like Ra, Ra!, Cachun, Cachun, and the popular children’s show titled En Familia con Chabelo. In addition to working in Mexican shows, he also appeared on the silver screen and also became famous as a renowned host. He rose to fame after creating his own show titled XHDRBZ in the year 2003. In addition to being a producer, he also acted in the show.
Some of his noted roles include La Misma Luna and La Familia P. Luche. His performance is well received in the Broadway play titled Latinologues. He also appeared alongside star actor Adam Sandler in the film titled Jack & Jill. He was last seen in the Mexican film titled How to Be a Latin Lover. His upcoming films are The Nutcracker and the Four Realms and Geostorm.

In 2016, Eugenio cooperates with the production of Lionsgate/Pantelion which features a movie titled How to Be a Latin Lover. The movie is written by Chris Spain and Jon Zack and directed by Ken Marino. Lastly, the film was released in the U.S. on April 28, 2017, and May 5, 2017, in Mexico.

Eugenio has received various awards for his works. He receives Premios Juventud: Supernova Award in 2013.
The actor also receives the Fénix Film Awards: Exhibitors Award in 2014 for Instructions Not Included. His awards include the TVyNovelas Awards ‘Person of the Year Awar’ in 2013 year.
Platino Award for Best Actor in 2014 for his work in Instructions Not Included. Lastly, he gets Premio Juventud for Best Actor in 2014.

Eugenio Derbez: Salary and Net Worth

The actor is popular and has played in various good movies. He must have good earning and his net worth is $30 million.

Eugenio’s death rumors were spread. However, in August 2018, the report confirms a complete hoax and said that it is just the latest in a string of fake celebrity death reports.

The actor is best known for his roles in Instructions Not Included or Under the Same Moon and is alive and well.

Mauricio Ochmann Married to his Longterm Girlfriend Aislinn Derbez!! Love is In the Air and their Romantic and their Lovely Love Story!