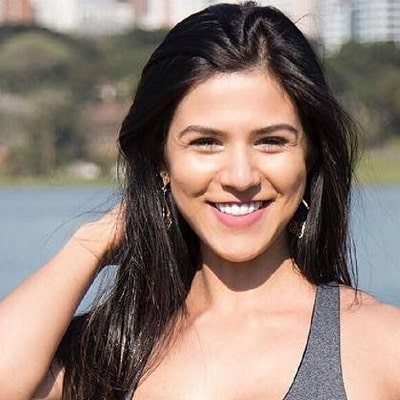 Eva Andressa is a married woman. She has been married to her longtime love Jardel Barros. Barros was the one who trained Eva and the two are extremely close to one another. Eva has a lot to thank for Jardel for helping her get in shape and inspiring her.

Who is Eva Andressa?

Eva Andressa is a Brazilian fitness guru, a bodybuilder, and a model who made her appearances on the covers of different fitness and wellness magazine, as well as a sponsored athlete of Athletica Nutrition.

She was born on on 19th December 1984, in Curitiba, Parana, Brazil. Her birth name is Eva Andressa Viera Nascimento. No information is available regarding her parents and siblings. She grew up in the Pine Nut Brazilian town and was very skinny and wished to be like the models and other curvy celebrities she saw on TV during her teenage.

Eva holds Brazilian citizenship but her ethnicity is unknown.

She started her fitness journey by joining the local gym. It wasn’t smooth sailing at first, seeing as Eva had a tough time working out without a trainer and having no knowledge of proper workouts on her own; she reportedly even quit the gym altogether in the first month.

Later, she came in contact with Jardel Barros a bodybuilding expert who became her personal trainer and whom she later tied the knot with.

She experienced some significant transformation in her entire physique within one year of professional bodybuilding workouts.

In 2005 she made her debut into the bodybuilding scene as she competed in the ‘NABBA Lobo Bravo Cup where she stepped in very powerfully and won the competition. Furthermore, in 2006 she also competed in the NABBA Paraná Figure Championships at the national level in Brazil.

After that, she decided to go off the bodybuilding scene for some years. Meanwhile, she continued her bodybuilding workouts persistently.

In addition, she started a fitness modeling career. To this end, in March 2013 Eva shot some eye-catching fitness photographs for the elitist lifestyle magazine Revista Sexy and she was also a fitness model for the Athletica Nutrition brand.

Likewise, in 2010, she made her first appearance in the popular Brazilian night talk show known as Programa do Jô. Furthermore, in 2015, she became an official television anchor, broadcasting her own personal program Dica Fitness

She won IFBB, Overall Champion Brazilain in 2009, IFFB Brasil in 2008, and several awards.