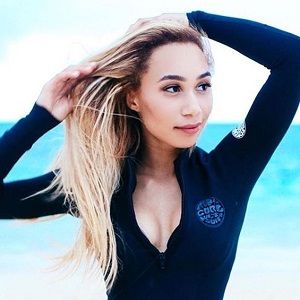 I don’t know when the “right time” is to tell the world you’re in love, but i guess it’s right now!

Minding my own business and documenting my youth with my friends.

Eva Gutowski is currently in a relationship. Eva is in a relationship with an Instagram model Olav Stubberud. The couple travel together and posts intimate photos on their social media handle.

Previously, she is dated Brent Rivera. However, they broke up.

She was also in a relationship with Adam Bartoshesky. Adam is a model by profession. The couple has started dating since 2016. But they were separated in Feb 2018.

Previously, Gutowski was dating Andrew Kingsbury. She was seen with Andrew celebrating his 22nd birthday in Thailand but their relationship didn’t last long.

Later, she was in a relationship with Alex Hayes but they broke up in a dramatic way in the middle of August.

Who is Eva Gutowski?

Eva Gutowski is an American YouTube entertainer and Vlogger.

Eva is known for her ‘Do It Yourself (DIY)‘ videos in her YouTube channel ‘MyLifeAsEva’ with over 11 million subscribers.

She is also an author who has written a book entitled ‘My Life As Eva’.

YouTube personality Gutowski was born in Brea, California on July 29, 1994, to Thai origin. She is the daughter of John Gutowski and Mrs. Gutowski.

She has a sister, Maya, and has an ethnicity of Caucasian.

While she was growing up she wanted to be an actor and possibly a psychiatrist.

She is currently studying Broadcast Journalism at Cal State Fullerton and looking forward to pursuing a career in entertainment and news reporting.

Before coming to fame, Eva Gutowski worked as a cashier in a ‘Mom and pop pizza shop’.

In her videos, she has also shown how to use the outfit of different styles.

Besides her YouTube personality, she is also an author who has written a book entitled ‘My Life As Eva’ which published on valentine’s day on February 14, 2017.

She was on a ‘Girls Night In’ tour with other YouTube fashion and lifestyle personalities like Alisha Marie, Niki Demartino, and Andie Case.

Young and talented Gutowski is a YouTube’s fastest-growing star and has been included in Billboard’s social media star lists.

Eva’s net worth is estimated to be $3 million. The average salary of a Youtuber with 11 million subscribers is $76500.

Gutowski’s fans started cyberbullying her ex, Alex Hayes. Besides this, she has not been part of any notable controversies in her career.