Eva LaRue is an actress and model. 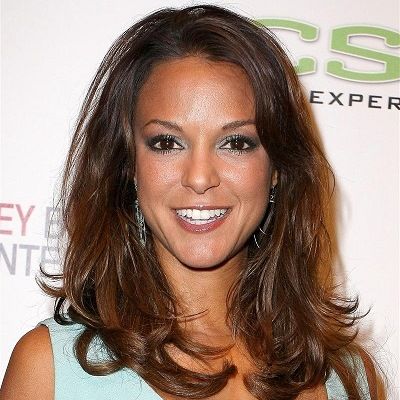 I think that if you start teaching about giving back and helping other people young, that will be a given for your child their whole life.

The Internet has been a great outlet for storytelling. After all, there are web-based shows that have started online and have then gotten picked up. I think it's a great opportunity for artists to get through the network roadblock. It just allows us another venue to be creative in.

I got married, had a daughter and made life-long friends there!

Eva LaRue’s relationship status is possibly single. But she was married and divorced three times.

She was married to actor John O’Hurley from 1992 to 1994. After her divorce from John, Eva began dating her ‘All My Children‘ co-actor John Callahan. They got married in 1996 and had a daughter, Kaya McKenna, in 2001.

But this marriage also ended with a divorce in 2005,

Then she began a relationship with a businessman named Joseph “Joe” Cappuccio.

They got engaged in 2008 and were set to marry in June that year. Unfortunately, they called off the engagement. They reconciled in 2009.

Who is Eva LaRue?

Eva LaRue is an American actress and model. Likely, she is known for her roles as Dr. Maria Santos on All My Children and Det. Natalia Boa Vista on CSI: Miami.

Eva LaRue was born in Long Beach, California, the United States on December 27, 1966. Her birth name is Eva Maria LaRue. Her father’s name is Luis LaRuy and her mother’s name is Marcie LaRuy.

Talking about her academic history, she graduated from Norco High School. Besides this, she has not revealed anything about her educational background.

Talking about her profession, Eva made her first film appearance in 1987, as ‘Kara’ in the “sword and sorcery” movie ‘The Barbarians.’ The following year, she was seen in her first recurring role in the ‘NBC’ series ‘Santa Barbara.’

Similarly, she appeared as ‘Margot Collins’ in 24 episodes of the series. In the subsequent years, Eva appeared in a handful of films and made brief appearances in several TV series.

Additionally, Eva worked as a TV host in the hidden camera reality series ‘Candid Camera.’ Her first significant TV role was that of ‘Dr. Maria Santos Grey’ in the ‘ABC’ (later aired on ‘The Online Network’) soap opera ‘All My Children.’ Her stint on the show spanned 129 episodes, from 1993 to 2011.

However, there were breaks in between. Eva was first approached to audition for the role of ‘Kendall Hart,’ which was later played by Sarah Michelle Gellar. ’ Whereas, Eva has appeared in many TV movies, such as ‘A Dream is a Wish Your Heart Makes: The Annette Funicello Story’ (1995), ‘Remembrance’ (1996), ‘Ice’ (1998), and ‘Cries in the Dark (2006).

Likewise, Eva has had brief recurring roles in the ‘NBC’ crime drama ‘Third Watch’ (as ‘Brooke’), the ‘Showtime’ drama ‘Soul Food’ (as ‘Josefina Alicante’), and the ‘ABC’ sitcom ‘George Lopez’ (as ‘Linda Lorenzo’).

In the year 2005, she appeared in five episodes of the ‘Style Network’ show ‘Modern Girl’s Guide to Life.’ In the same year, Eva began portraying her next significant role, in the ‘CBS’ procedural drama ‘CSI: Miami.’ Eva essayed the role of ‘Natalia Boa Vista’ in ‘CSI: Miami,‘ from its fifth to tenth seasons, spanning 152 episodes.

Besides that, she had a recurring role in the fourth season. After playing single-episode characters in ‘CBS’s ‘Criminal Minds’ and ‘Fox’s ‘Hell’s Kitchen,’ Eva joined the cast of the sitcom ‘Fuller House.’ Therefore, Eva is also an entrepreneur. Eva owns a ‘YouTube’ channel that primarily hosts parenting-related content.

Eva LaRue won Outstanding Performance in a Daytime Drama for All My Children (1970) at ALMA Award, she won Best Supporting Actress/Television for CSI: Miami (2002) at Imagen Award.

LaRue has an estimated net worth of around $4 million as of 2021. As per her salary, the figure is not calculated yet.

But she had been the victim of the casting couch in her initial years. She once accused actor-producer Steven Seagal of sexually harassing her on the pretext of a screen test.

But, she doesn’t have an official page on her Instagram.

Does Eva LaRue have a daughter?