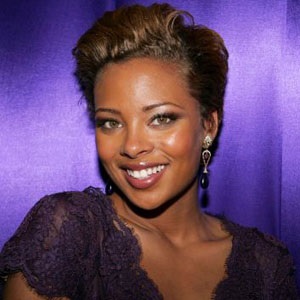 I've learned that I can only live for myself. I cannot be focused on the world's idea of who they think I am or who I'm supposed to be. I can only be the best me. And if that means that even though I seem eligible and should be in a relationship, maybe I shouldn't be right now, because I am not emotionally available. It's knowing yourself and being more in tune with who you are vs. who the world wants you to be

So if I can give anyone advice in this business on love and balancing, it's that you truly have to take a second, step back, to figure out who you are and what you want. And it is okay if those people around you don't fit into that. Because what you don't want to do is end up living your life for someone else

I've been blessed, because the type I started in was competition based. It was about being witty and smart and innovative and different. I don't get backlash like some of the reality shows today because that's not who I am.

Regarding her personal life, In 2006, Eva Marcille dated Lance Gross, whom she met at Tyler Perry’s House of Payne. The two became engaged in 2008 but broke-up in 2010.

She then had a relationship with rapper Flo Rida for two years. In 2013, she began dating singer-songwriter, Kevin McCall. This beautiful couple has a beautiful daughter named as Marley Rae McCall.

She was Marcille’s first child and McCall’s second. McCall and Marcille broke up in early 2015. She currently dating Michael T. Sterling. She has never been married.

Who is Eva Marcille?

Eva Marcille is an African American actress as well as a multitalented television host. Eva Marcille is also a beautiful and attractive fashion model who recently played the role of Tyra Hamilton on the Soap Opera The Young and the Restless.

Her real name is Eva Marcille Pigford but she changed her name for acting. She started her career by winning the third cycle of American’s Next Top Model.

Marcille was born on October 30, 1984, in Los Angeles, California. She belongs to the ethnicity Afro-American and nationality American.

He was born in the Pigford family as a daughter of Evan Pigford (father) and Michelle Pigford (Mother). Her middle name, Marcille, is an amalgam of “Marjorie” and “Lucille,” her grandmother’s names.

She got her high school education from Washington Preparatory High school and graduated from Clark Atlanta University in Atlanta Georgia; however, she left the School Shortly after winning the third cycle of America’s Next Top Model.

Eva Marcille won the third Cycle of America’s Next Top Model, beating fellow contestants Yaya DaCosta, Amanda Swafford, and Ann Markley and got a modeling contract with Ford Models as well as Cover Girl cosmetics contract, and a spread in Elle magazine.

She was also nominated for two NAACP Image Award for Outstanding Actress. Marcille also performed as host for “Rip the Runway”, “My Model Looks Better Than Your Model” and “Hair Battle Spectacular”. Her movie credits now include “The Walk”, “Crossover”, and” I Think I Love My Wife”.

She hosted the first season of the Oxygen reality series Hair Battle Spectacular in 2010. In 2015, Marcille stars in the main cast as the role of Tara in the TV one series Born Again Virgin.

Eva Marcille: Salary and Net Worth

Her net worth is $ 3 million but her salary is not revealed yet.

According to rumors, she was engaged with Lance Gross but they split up before her marriage.

Eva Marcille has a good height of 5 feet 6.5 inches with body weight 56kg. He has light brown hair color and her eye color is hazel green. Her bra size is 32 B, her shoe size is 8(US) and her dress size is 2(US).