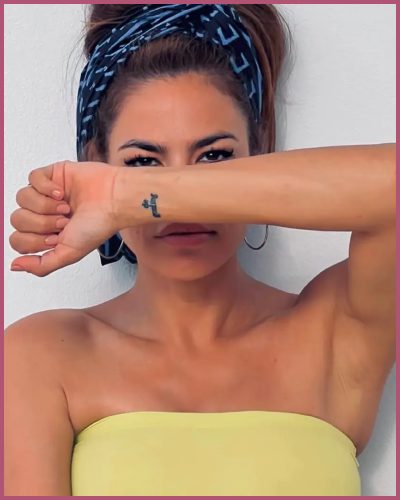 Eva Mendes, 48, took to Instagram on Tuesday morning, November 16, to show off a new tattoo on her inner wrist. She shares a snap of herself holding her arm up to show off the inking that reads ‘de gosling‘.

The “Training Day” actress has been dating Canadian actor Ryan Gosling for over a decade. The beautiful couple also shared two children together a daughter Esmeralda, 8, and Amada, 6.

It is unknown if Eva and Ryan are married or not because they are a notoriously secretive couple when it comes to their relationship. Her new tattoo indicates that she has married her longtime boyfriend Ryan Gosling.

Married women in Hispanic culture will frequently add their husbands’ names to their own using ‘de,’ which means ‘of’ in English. The word ‘de’ separated the two names, so if Eva married Ryan, she would be known as Eva Mendes de Gosling.

Fans, however, couldn’t get enough of the rumors that the power couple had married.

Eva and Ryan were first linked in 2011 while working together on the movie “The Place Beyond the Pines.” In 2016, there were initially reported that they had secretly wed, but Mendes and Gosling never confirmed it.

During a family hike in 2021, the actress was seen sporting a glittering bauble on her left ring finger, but once more, the couple remained silent. Similarly, it’s not the first time Mendes has flashed his ‘de gosling’ tattoo.

Eva earlier gave a glimpse at her inner wrist ink. She teased fans with the design in 2020, and in September, she posted a picture on Instagram with the sentimental tattoo subtly displayed while featuring a field of flowers.

Whether or not they’ve actually said “I do,” Mendes’ tattoo is proof that the couple’s relationship is still going strong.

Eva Mendes is an American actress. Eva is also a Model and Business Woman.

Besides these Eva is also a designer, she designs a fashion collection for New York & Company. See more…