Evan Jonigkeit is happily married to the actress, Zosia Mamet. The couple started dating in 2013.

After dating for three years, the couple got married on the 2nd of October 2016. Both of the actors have not shared any details on their wedding.

They broke the news through Instagram with a picture along with the caption married to my best friend.

His Instagram posts suggest that he is an animal lover. 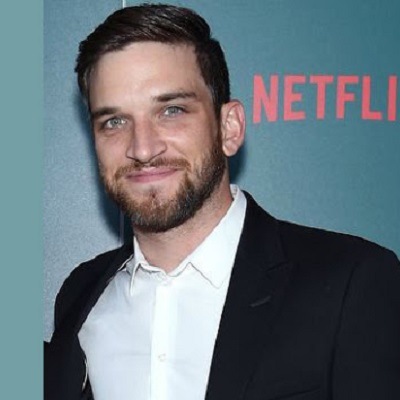 Who is Evan Jonigkeit?

Evan Jonigkeit is a Copper Wing Award-winning actor and producer. He is renowned as Toad of X-Men, Matt of Easy, and Will of Sweetbitter.

Next, in 2020, he will be appearing in the movie, The Empty Man as Greg. The movie is completed and awaiting its release date.

Also, his upcoming movie, Old Man in France is in the stage of Pre-production.

Evan Jonigkeit was born on 25th August 1983 in Bucks County, Pennsylvania, United States. He is of British-Irish ethnicity. As of 2020, he is 37 years old. Also, his zodiac sign is Virgo.

To date, he has not shared any details on his family background his father, mother, and siblings. However, he shared a picture of his father via Instagram on father’s day.

Talking about his academics, he is a graduate of Neshaminy High School.

Later, he joined Temple University in Philadelphia on a baseball scholarship. However, he got sidelined from the university which led him to join the theater.

Evan Jonigkeit started his acting career in movies and TV series in some character roles. Before that, he used to do lawn work. Later, he started doing theater.

During the time, he contacted a New York agent who cast him in the play, High by Matthew Lombardo. In the play, he played the character of a 19-year gay drug user, Cody Randall.

His character, Cody became groundbreaking in his career. After that, he was cast in the plays like The Snow Geese as Duncan Gaesling and Really Really as Jimmy.

After a successful career in theater, he made his big debut with the movie, X-Men: Days of Future Past. In the movie, he appeared playing the character of villain Toad. Despite being a very short character, his performance in the movie got noticed and praised.

After that, he appeared in the movies like Tallulah as Nico, Brave New Jersy as Sparky, and The Night House as Owen. Apart from the movie, he is also popular for his TV appearance.

Some of his TV appearances along with his character names are-

Besides being an actor, he is also a talented producer too. In 2016, he started his production career with the short movie, Mildred & The Dying Parlor as an executive producer. After that, he produced the projects like Kate Can’t Swim, and Stand for Right.

As of now, his upcoming projects; Whiling and Be the Bill are in the stage of being post-produced.

Besides that, he also makes through his production works. Apart from that, as a theater artist, he makes in the range of $15k to $81k.

Evan Jonigkeit has blue eyes with brunette hair. His height is 5 feet 9 inches and weighs around 73 kg.

Also, his measurements of his chest, waist, and biceps are 42, 23, and 14 inches respectively.

As of now, he has not been through any sort of controversy and scandals that created headlines in the media. Besides that, he has also managed to maintain distance from any type of rumors.

You may also read the bio of Wes Brown, Oliver James, and Michael Cassidy.