Just Married, Evan Lysacek is a 2010 Olympic champion figure skater. Evan has been a celebrity contestant on a reality show, Dancing with the Stars! 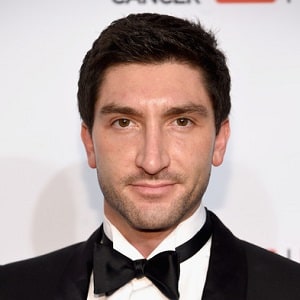 When relationships are hard, they’re impossible. But when they’re right, it’s so easy. So for us it was so easy — and that’s kind of how I knew it was right.

And then just about a year and a half ago, we had a long talk and she said, ‘Come to L.A. and visit sometime,’ and I said, ‘I’m going to come right now.

I went there the next weekend to see her and then we just said, ‘Do you think this would work if we try it?’ And we said yes and we didn’t look back.

What is the relationship of Evan Lysacek?

The wedding ceremony of Evan and Dang was a private affair with 70 people surrounded by close friends and family.

Evan and Dang met via mutual friends in 2010 and he fell in love with her at first sight. Then he proposed to her on her birthday, April 1, 2019, in Miami.

Previously, there were reports which suggested that Evan Lysacek and Vera Wang were dating for a brief amount of time.

Who is Evan Lysacek?

Lysacek was born Evan Frank Lysacek in Chicago, Illinois on June 4, 1985. He was born to parents Tanya and Don. His father is a building contractor and his mother is a substitute teacher.

Additionally, he has an older sister, Laura, and a younger sister, Christina. He was interested in acting as a child and began skating at the age of eight. He is of American and Greek nationality.

Furthermore, he belongs to a mixed ethnic background of Czech/Moravian, Italian, and Syrian.

Evan Lysacek won the U.S. national title at the Juvenile level in 1996. Additionally, he moved up to Intermediate and won the pewter medal at the Junior Olympics in 1997.

Eventually, he made his senior national debut at the 2001 U.S. Championships. He was named the third alternate for the 2003 Four Continents Championships and finished 10th.

He is the first American to win the Olympic title in men’s singles since Brian Boitano. Lysacek supports the Dana-Farber Cancer Institute. Furthermore, he has also acquired many sponsors, including Ralph Lauren, AT&T, and Coca-Cola. He was a celebrity contestant on ‘Dancing with the Stars.

As of 2022, Lysacek has an estimated net worth of around $ 4 million at present. The average salary of an American figure skater is $51,370.

Lysacek’s win against Russian Evgeni Plushenko in the Olympic men’s figure skating competition was controversial after the judge’s decision was criticized. At present, there are no rumors concerning his life and career.

Talking about his body measurement, Evan Lysacek has a height of 6 feet 2 inches (1.88 m). Additionally, he weighs around 73 kg. Furthermore, his hair color and eye color was dark brown.