She was dating British actor Jamie Bell in 2005 after they co-starred in the music video for Green Day’s song “Wake Me Up When September Ends”.

They got matching tattoos each other’s initials; in Wood’s case, a “J” on her left ankle.

After a year togetherness, the relationship ended in 2006. Wood later commented that “We had matching tattoos because we knew our love would last forever. Trouble is, it didn’t, things happened, we split. But I don’t regret the tattoo. It reminds me of a great, great period in my life”.

Then in January 2007, Wood’s relationship with Marilyn Manson became public. The two met at a party at the Chateau Marmont Hotel. She has stated that she was attracted to Manson’s frequent use of black eyeliner and once described their relationship as “healthy and loving”.

The couple split in November 2008; according to Wood, they “both decided to take some time apart so ‘they’ could concentrate on their work”. They later reunited and it was reported in early Januar 2010 that the couple was engaged to be married.

Wood and Marilyn Manson ended their engagement in August 2010.

In the summer of 2011, Wood was reported to have rekindled her relationship with Jamie Bell, five years later they first broke up. Shortly after Wood disclosed that she was bisexual via twitter. Evan Rachel Wood and Bell were married in a small ceremony on October 30, 2012. They have one son named Jack born in July 2013.

She had a home birth with her son, and publicly thanked Ricki Lake, creator of the documentary The Business of Being Borin, for Inspiring her decision. In May 2014, Wood and Bell announced that they had separated after 19 months of Marriage.

Then In January 2017, Wood got engaged to her Rebel and a Basketcase bandmate, Zack Villa. However, this affair also ended after one month of engagement. 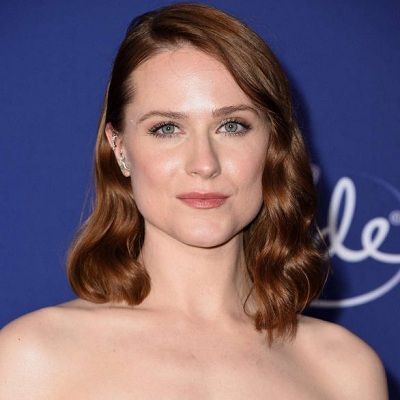 The biggest lessons I've learned in life have probably come from a bad situation, from an angry situation, even if I wasn't the one who was angry

I do love when men wear cologne - if I get a hint of it, I want to move closer so I can smell it more.

Who is Evan Rachel Wood?

Evan Rachel Wood is an American actress and musician. Her breakout role in the film ‘Thirteen’ led to other notable projects such as ‘The Wrestler’, ‘Mildred Pierce’, and ‘Westworld’.

Evan was born on September 7, 1987, in Raleigh, North Carolina, the U.S. Her mother, Sara Lynn Moore is an actress, director, and acting coach, and has converted to Judaism.

His father is from a Christian family and he is also the Executive Director of a local regional theater company called Theatre in the Park. Wood has a brother, Ira David Wood IV, who is also an actor.

She has two other brothers, Dana Thomas, and a sister named Aden. Her paternal aunt, Carol Winstead Wood, was a Hollywood production designer.

Being raised in a filmy background, he and his brother went to Theatre in the Park. She made an appearance in the 1987 production of her father’s musical comedy adaptation of A Christmas Carol when she was just a few months old.

Subsequently, she played the Ghost Christmas Past in several productions at the theater, and she later starred as Helen Keller alongside her mother (who played Anne Sullivan) in a production of The Miracle Worker, under her father’s direction. Wood’s parents separated in 1996 and later divorced, and Wood moved to her mother’s native Los Angeles County, California.

Evan attended Cary Elementary, a public school in Cary, North Carolina. She was subsequently home-schooled and received her high school diploma at age 15.

Talking about Evan’s career, she began acting at the age of seven. She was cast in ‘Once and Again’ as Jessie Sammler. She played a young girl befriending a mentally ill man in ‘Digging to China’ starring Kevin Bacon and Mary Stuart Masterson. It was the ‘Children’s Jury Award’ at the Chicago International Children’s Film Festival’.

In 1998, Evan Rachel Wood was cast in the fantasy film ‘Practical Magic’ directed by Griffin Dunne, as the niece of the sisters portrayed by Sandra Bullock and Nicole Kidman. Then in 2002, she won a lead role in ‘little Secrets’ as Emily Lindstrom, an aspiring concert violinist. She won a nomination for ‘Best Leading Young Actress’ at the ‘Young Artist Awards’.

Evan Rachel Wood acted opposite Cate Blanchett and Tommy Lee Jones in ‘The Missing’, as their kidnapped daughter in 2003. She also acted in the ‘Got Murder?’ an episode of the TV series ‘CSI: Crime Scene Investigation’. IN 2005, she appeared as a narrator in the film ‘The Upside of Anger’, and played Lavender Wolfmeyer, one of four sisters coming to terms with their missing father, starring Kevin Costner and Joan Allen.

Wood also played the estranged daughter of Randy “Ram” Robinson in 2008 released ‘The Wrestler’, which was directed by Darren Aronofsky. The movie won the ‘Golden Lion Award’ for Best Film at the ‘Venice Film Festival’. In 2009, she played Melodie opposite Larry David Woody Allen’s ‘Whatever Works’. She played Juliet in a fundraising production of William Shakespeare’s ‘Romeo and Juliet’ directed by her brother.

From 2009 to 2011, she played the recurring role of Sophie-Anne Leclerq in the HBO series, ‘True Blood’. In ‘The Conspirator’, she played Anna Surratt. She also acted in ‘The Idles of March’. IN ‘Mildred Pierce’, the 2011 HBO miniseries, she portrayed the title character’s daughter Veda Pierce. She was nominated for the ‘Primetime Emmy Award for Outstanding Supporting Actor in a Miniseries or a Movie’.

Some of Wood’s Major Works, Wood’s 2003 role in ‘thirteen’ as Tracy Freeland caught in the web of drugs, sex, and crime, won her nominations for a ‘Golden Globe Award’ and a ‘Screen Actors Guild Award’ for ‘Best Actress’. IN ‘Pretty Persuasion’, she played Kimberly Joyce, a crafty, sexually precocious high school student.

In 2006, Wood acted in the Golden Globe-nominated biopic on Augusten Burrough’s ‘Running with Scissors’ as Natalie Finch. She was awarded the ‘Cannes Film Festival Chopard Trophy for Female Revelation’ for her performance.

Wood also voiced the character Mala in the 2008 sci-fi animation ‘Battle for Terra’, a Grand Prize winner at the ‘Ottawa International Animation Festival’. Wood was a ‘Midnight Award’ at the ‘San Francisco International Film Festival’.

This actress has an estimated net worth of $8 million. But her salary and other incomes are not revealed.

“Westworld’ actress Wood says that she was raped: ‘I am Strong, but I am still not okay’.

Hence, Wood revealed that she had been raped twice in her life and said both assaults continue to affect her years later.

Her body measurement is 34-26-34 inches which are just perfect body women can have. She has golden brown hair color and blue eye color.