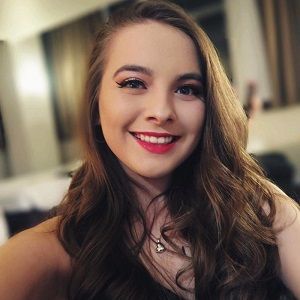 The 18-year-old British YouTuber, Eve Bennett is an unmarried woman. Furthermore, she has never been linked up in any relationship. Moreover, this beauty guru has never been spotted with any boys to date.

Talking about her past relationship, there is not any information regarding her former relationship. So far, she has kept herself out of the relationship stuff and totally focus on her career. As per the reports, Eve is currently single and living happily with her parents.

Who is Eve Bennett?

Eve Bennett is a famous British YouTuber and beauty guru. Currently, she runs a YouTube channel which has amassed over 206k subscribers as well as more than 99k followers on Instagram.

Eve was born on January 11, 2000, in Wolverhampton, West Midlands, England. Talking about her nationality, she is British and her ethnicity is unknown. As a child, she developed her interest in makeup as well on YouTube.

Eve began her YouTube career a couple of years back when she first joined YouTube on June 27, 2014. She is a famous British YouTuber and beauty guru. Currently, she runs a YouTube channel which has amassed over 206k subscribers as well as more than 99k followers on Instagram. Besides this, she is also famous on Twitter with more than 120k followers.

Furthermore, she has also endorsed a couple of brands through her YouTube channel. Her first video was YouTube Culture From a Viewer’s View followed by another video named What’s in My School Bag. Additionally, she also runs another YouTube channel titled Revision With Eve on which she has gained more than 113k subscribers.

As of now, she has earned millions of views on her YouTube channel. Some of her most watched videos are MY GCSE RESULTS, WHAT I GOT FOR CHRISTMAS 2016, HOW TO REVISE AND ACE YOUR EXAMS, MY A LEVEL RESULTS, and What’s In My School Bag 2016. In addition, Eve has also collaborated with Beckii Whiting.

Being a famous YouTuber and beauty guru, she earns a decent amount of money from her profession. However, her salary and net worth are unknown.