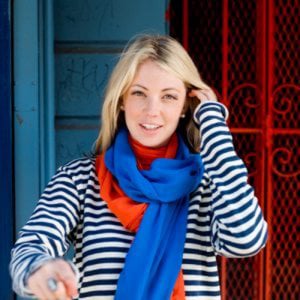 Ever since she was a girl, Evelyn was interested in foreign cultures and fascinated by traveling to distant countries. She traveled to France, the United Kingdom, Israel, where she learned the three languages of the place.

In addition to visiting the three countries as a simple tourist, she also walked in Asia, Europe, and South-America, where she has climbed on Mount Machu Picchu, and visited all of Peru.

Evelyn Taft married to Ross Resnik which was for a long time her boyfriend and have two beautiful children. Ross is the founder of Roaming Hunger, a popular directory website. Even if after their marriage in 2011, they still seem to be partners and good friends and it seems that they have been married for a very long period of time.

The Journalist is enjoying her family life and life with children at the moment. She likes to credit her husband as one of the best father to their children. As of now, she is living her dream and happily married.

Who is Evelyn Taft?

Evelyn Taft is a well-known American journalist, news anchor, and news director. She is also popular for being a new editor of KCAL. As a journalist, she is mainly famous for being a weeknight meteorologist on KCAL-TV Channel 9 stations.

Evelyn Taft was born On August 24, 1984, in the Bay region, San Francisco, the United States of America. Her nationality is American and her ethnicity is Russian-Jewish.

She was born to Russian Jewish parents. Though she was born in the United States, she spends most of her childhood days in France, Israel, and London.

For this reason, she started to speak Russian as her childhood language, and she also learned Hebrew, French, and English, of course, later on, it is not known for sure if she has sisters or brothers, so most probably, she was the only child and no other children in the family.

Since she was a child Evelyn Taft has had a big interest in Meteorology, and for this reason, she moved to Los Angeles to complete her studies.

In fact, after completing High School at Menlo School in Atherton, California, she attended Annenberg School of Journalism at the University of Southern California. In 2006, she took a degree in Broadcast Journalism and Political Science.

During her college years, she workouts and she were already busy with weather report forecasting, at University. Finally, she got a certificate in Meteorology at Mississippi State University.

Evelyn was in her early teens when she entered the media world for the first in her life. Two years later when she was 16, she hosted her first show. In this period Evelyn Taft is working on Television at KCAL-TV channel 9 of the Los Angeles station as a night meteorologist during the week. Apart from the weather, she also worked as a presenter, editor, director, and reporter for this TV Channel. He started working at KCAL on August 9, 2010.

In the same period of time, she had been hired by the television channel along with three other journalists: Stephanie Simmons, Sharon Tay, and Rick Garcia. This Broadcaster is among the most important in Los Angeles, having a huge audience. The general manager has immediately acknowledged the success of Evelyn Taft and his three colleagues for their great teamwork, personality, the unique experience in meeting the spectators. In fact, she has been allocated four casters in primetime at 22:00 on weekdays.

With the induction of Evelyn Taft and the three newcomers, the views are flown levels 160,000, an increase of 28%. Before Joining KCAL 9, she had worked for KRON 4 in San Francisco, presenting the weather forecast. Before KRO4, he worked with KCOY (CBS) as a reporter and weather presenter. At the same time, she has made forecasts for another media house, the KION. Evelyn Taft is an Icon of the weather forecast because of her knowledge, passion, and understanding of the subject. Unlike the typical and boring and cold weather on journalistic services in weather forecasting, Evelyn offers his time in hot randomly, causing great concentration by the spectators. She is impeccable and very relaxed in her explanations.

Ferne McCann’s net worth is around $1 Million but her salary is not revealed yet.

There have been no such rumors and controversies over Evelyn Taft to date.

Evelyn has a height of 5 feet 4 inches and weighs 60 kg. Her hair color is blonde and her eye color is blue. Her body measurement is 39-25-37 inches and wears a bra size of 34DD. Her shoe size is 6.5(US) and her dress size is unknown.