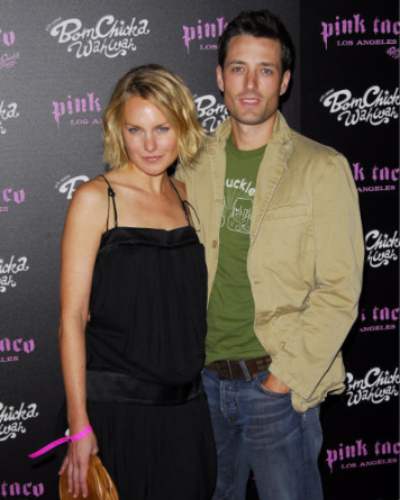 Here are a few things you may not know about the actress’s married life and her husband.

Inside the life of Bruce Weyman

Bruce is widely known as the husband of Laura Allen. He was born on March 5, however, he has not revealed his birth year. As per the report, he is from Itlay. He is a model and a cyclist. The model learned how to ride the cycle at the age of six.

On one of his Instagram posts, he revealed cycling gives him happiness. He often posts pictures while cycling with his crew. Moreover, going through his social media profile, he often posts about his wife, kids, and dog. There is not a lot of information about the model on the internet.

Married life of Bruce and Laura

Laura and Bruce are together for more than 16 years now. They first started dating back in 2004. After two years of dating, the couple got married on September 23, 2006. They had their wedding anniversary at the Relais Palazzo del Capitano in Pienza, Itlay.

The couple post continuously about each other and their kids on their Instagram. Moreover, they also share a snap from their family time and vacations. They are very supportive of each other’s careers and cherish respective other’s success. They are happily married for more than a decade living with their two kids and a dog.

The actress got pregnant with the couple’s first baby in 2008. At the time, she stated the couple was very excited to welcome the first grandchild of both of their families. Furthermore, she added:

“We don’t know boy or girl, but we are pretty sure our baby already has a palate for Indian food and Pinkberry.”

On September 3, 2008, she welcomed her first child, Harper Edward Weyman. He was born in Los Angeles weighing  9 lbs., 5 oz. The couple welcomed their second child, Jake Bliss Weyman on June 5, 2012.

You may also read- Who is Katie Yeager? 4 unknown facts about the Teen Mom star Katie!

Laura Allen is an American actress who starred as Lily Tyler during the first two seasons of the USA Network show ‘The 4400’. Also, she is also recognized for her performances in ‘All My Children’, ‘Mona Lisa Smile’, and ‘Law&Order: SVU’. See more bio…

You may also read- 5 must-read facts on Aníbal Marrero – husband of Alejandra Espinoza!