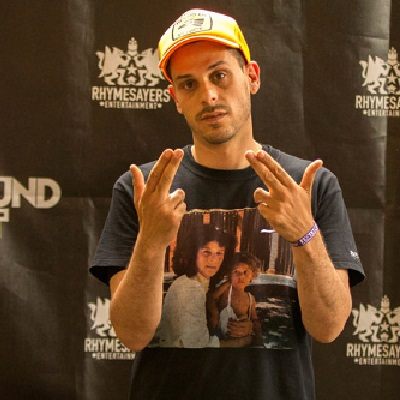 What is the relationship of Evidence (Michael Taylor Perretta)?

Currently, Evidence is single and not in a relationship with anyone.

Previously, he was married to Wendy Guerra. Together, they have a son Enzo Taylor Perretta born in 2015.

Unfortunately, his wife, Wendy died due to cancer on April 19, 2018, at the age of 38. As of April 19, 2019, Evidence posted his family picture on Instagram on his wife’s first death anniversary.

Evidence is the professional name of American rapper Michael Taylor Perretta. Evidence is a record producer and group member of Dilated Peoples.

As of 28 Oct 2019, Evidence reunite with The Alchemist and released the song Burnt Tree.

Evidence was born as Michael Taylor Perretta on December 10, 1976, in Venice, Los Angeles, California, the U.S to Louis Michael Perretta (father) and Jana Taylor. His birth sign is Sagittarius.

Michael’s mother is a television actress. She is well-known for her role as Angie Costello on the radio-TV series Soap Opera and General Hospital.

She died on April 27, 2004, because of cancer in Venice, Los Angeles. Regarding his ethnicity and academics, details are not yet provided.

Dilated People is a hip-hop group from Los Angeles, California. This group is known for its 1997 songs Third Degree, Confidence, and Global Dynamics on ABB Records. Later, he did a hip-hop tour with his group. He also collaborated with Eminem in Search 4 Bobby Fisher.

A Career In Solo Work

Evidence released the album The Weatherman LP on March 20, 2007, with production from The Alchemist, Sid Roams, Jake One, DJ Babu, and DJ Khalil.

He was very close to his mother. So, after his mother’s death, Evidence dedicated the songs I still Love You and Chase The Clouds Away to remember her.

On July 17, 2009, it was announced that he signed a contract with Minneapolis-based hip-hop label Rhymesayers Entertainment.

3rd Studio Album- Weather or Not

He has auburn hair and brown eyes. His height is 6 feet 1 inch and has an average weight.