Updated On November 10, 2021 | In controversy , Dating , Relationship
Share this 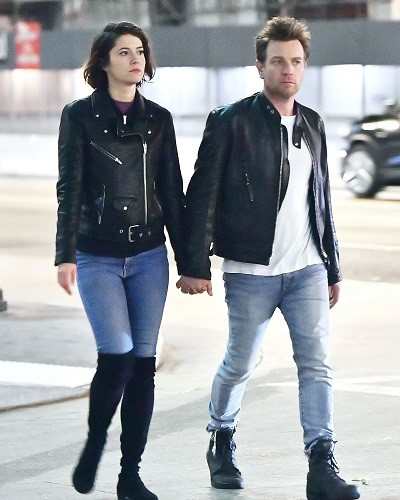 **NO WEB UNTIL 0001 GMT 13TH NOV PREMIUM EXCLUSIVE*** Ewan McGregor spotted out with his Fargo costar and new girlfriend Mary Elizabeth Winstead in Hollywood, CA. The couple were seen hand in hand while whistling during a stroll to the Pantages Theatre to catch a showing of Hamiton. McGregor has split from wife Eve Mavrakis' because of his affair with on-screen lover Winstead. It was revealed earlier this month that McGregor, 46, and Eve, 51, who share four daughters, reportedly split in May as photos emerged of the British actor kissing Winstead, 32, at a restaurant in London. 08 Nov 2017 Pictured: Ewan McGregor and Mary Elizabeth Winstead. Photo credit: Marksman/MEGATheMegaAgency.com +1 888 505 6342

Ewan McGregor is happily dating his girlfriend Mary Elizabeth Winstead. He and his wife Eve Mavrakis ended their 22-years-old marriage two years back. The actor revealed he is in the happiest stage of his relationship with his co-actor of ‘Fargo’. Here is the description of the journey of a beautiful love story of the couple.

After filing divorce with his ex-wife Eve Mavrakis, he started dating his ‘Fargo’ star Mary Elizabeth. As per the reports, the former couple parted their ways in May 2017, meanwhile, Ewan kissed  Mary at The Good Life Eatery five months later. Ewan and Mary met on the set of ‘Fargo’ where they starred as co-stars. The month Ewan announced his split with his ex-wife, on the same month Mary announced her split with her ex-husband Riley Stearns.

Recently, the couple walked arms-on-arms on Hudson River Park walking their dog Fido. They walked on the side of riverside sharing a kiss in between the walk. They two met while they both were married to their respective former partner.

The controversial split of Ewan and his ex-wife

The actor was spotted kissing Mary six months before she filed a divorce with his ex-wife. His 18-years-old daughter Esther McGregor slammed her father for cheating her mom in the song form. Afterward, he officially filed a divorce with his ex-wife stating the reason for their irreconcilable differences. At the time of divorce, he asked for custody of the couple’s three children.

However, their children did not want to stay with him and his girlfriend. One of the sources stated that they blame Mary for destroying their family at the time. Moreover, the source also explained they were very hurt at the time of divorce. Eva was devastated after the picture of Ewan and Mary kissing went viral on the Internet.

“It’s disappointing and upsetting but my main concern is our four children are okay.”

Their eldest daughter Clara hit out at Mary on Instagram. Moreover, she also commented ‘piece of trash’ on the picture of her on one of the fan’s account. On the picture of Mary with the caption of her calling beautiful, Clara commented:

“Most beautiful and talented woman on earth? (laughing faces) Oh man y’all are delusional. The girl is a piece of trash (smiley face) x.”

This also led to some problems in their relationship, however, they later reunited and now they are on the happiest stage.

Ewan is a Scottish actor and a director. He is well known for his roles in ‘Trainspotting’ and the ‘Star Wars’ prequel trilogy, which gave him his biggest breakthroughs. Additionally, he is the entrepreneur of ‘Natural Nylan’ and has appeared in a number of low-budget. artsy Hollywood movies before he was offered the indelible roles of ‘Mark Renton’ and ‘Jedi Obi-Wan Kenobi’. See more bio…