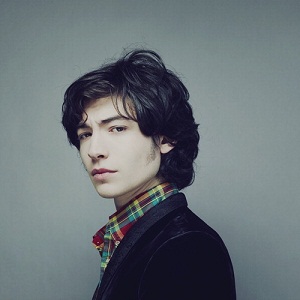 It makes sense that we came up with our public school system during the Industrial Revolution because it's like everybody is a factory worker, eating their terrible food and going back to the room where you're silent and listening to an idiot. That's an epitomizing idea, getting called 'Nothing' for your whole high school experience

Every teenager deals in his or her own sexuality and has to face it and figure out how it can coincide with the rest of their lives in a healthy manner. And try to navigate it in our modern society, which is wrought with stigma and taboo and repression, and sort of as a result, these inner monsters that some teenagers really struggle with

I was a weird animal in high school, doing no work and getting straight A's.

What is the relationship of Ezra Miller?

Miller has opened up about being gay in November 2017. There was news of him being gay in 2012 itself but when asked about his sexuality if he was gay, he said that it was a mistake.

But now he has openly accepted being attracted to the same sex. There is no information about his boyfriend but he is in a relationship and happy with him.

Who is Ezra Miller?

Ezra Miller is an American actor, singer, musician, and activist. He made his film debut in the film Afterschool. He plays Barry Allen/The Flash in the DC Extended Universe, appearing first in Batman v Superman: Dawn of Justice. He was also featured in Credence Barebone in Fantastic Beasts and Where to Find Them.

How many siblings does Ezra Miller have?

Miller was born on September 30, 1992, in Wyckoff, New Jersey, US. His nationality is American and his ethnicity is mixed(Ashkenazi Jewish, German, Dutch).

His birth name is Ezra Matthew Miller. He was raised in the same place where he was born. His mother’s name is Marta (Koch) and his father’s name is Robert S. Miller. Her mother was a modern dancer by profession while his father was senior vice president and managing director of Hyperion Books, and later became a publisher at Workman Publishing.

She has two older sisters namely Saiya and Caitlin. Ezra considers himself Jewish.

When he was six, he started to go to opera classes which helped him overcome a speech impediment.

Miller attended Rockland Country Day School and The Hudson School, dropping out after the release of the film Afterschool.

Miller began his acting career in 2008 with Antonio Campos’s film Afterschool, in which he played a teenager at a boarding school. He had already played in Cakey! The Cake from Outer Space (TV Series short) and Critical Hit! (TV Movie) in 2006 and 2007 respectively. The same year in 2008, Miller also acted as Damien on the Showtime’s hit comedy television program Californication.

After that, Miller appeared on City Island and Law & Order: Special Victims Unit (TV Series) in 2009. The following year, he co-starred in Beware the Gonzo and Every Day, both of which premiered at the Tribeca Film Festival. From 2009 to 2010, Miller played in the TV series Royal Pains.

Miller next appeared in 2011 in the BBC Films movie We Need to Talk About Kevin with John C. Reilly and Tilda Swinton, which was directed and adapted by Lynne Ramsay from the 2003 novel of the same name. The film became a Cannes Film Festival sensation, winning critical acclaim. The same year, he also appeared in Busted Walk and Another Happy Day.

In the movie adaptation of the novel The Perks of Being a Wallflower, he played Patrick, opposite Logan Lerman and Emma Watson. The film was released on September 21, 2012. Madame Bovary followed in 2014, with The Stanford Prison Experiment and Trainwreck following next in 2015.

Warner Bros. announced that he would star as Barry Allen / The Flash in a live-action film adaptation of the DC Comics character The Flash set for release in 2018. He first appeared as the character in Batman v Superman: Dawn of Justice and Suicide Squad in 2016, and will reprise the role in Justice League in 2017. He is the youngest actor to play Barry Allen/The Flash. In 2016, he also appeared in Fantastic Beasts and Where to Find Them as Credence Barebone, the role that he will reprise in its sequel Fantastic Beasts and Where to Find Them 2 in 2018.

On June 28, 2011, when he was shooting The Perks of Being a Wallflower, Miller was a passenger in a vehicle that was pulled over for broken brake light, and police discovered that he had 20 grams of marijuana in his possession. He was initially charged with drug possession, but a judge later dropped the charge. Instead of these charges, Miller faced a penalty of $600 for two citations of disorderly conduct.

How tall is Ezra Miller?

Ezra has a height of 5 feet 11 inches. His body weighs 72kg. He has black hair and dark brown eyes.