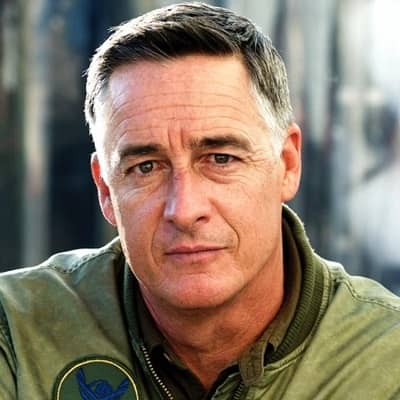 As of now, Faber Dewar’s relationship status is married. He is married to Ute Emmerich. She is a producer and partner at Centropolis Entertainment. Details regarding their marriage are not disclosed yet.

The couple also has a son, Faber Hans Emmerich Dewar who was born on February 7, 2005, in Los Angeles, California.

Who is Faber Dewar?

Faber Dewar is an actor and producer. He is best known for movies like White House Down and The Gene Generation.

Furthermore, he is also the CEO (Chief Executive Officer) of a company, Drink Up. It was established as for the need for clean, reasonably priced, safe drinking water for everyone.

The actor was born in Chislehurst, United Kingdom. Details regarding his birth date are also unknown. He grows up with his parents in his hometown.

The names of his parents and siblings are unknown. He belongs to British nationality and is of Scottish and English ethnicity.

Talking about his education, he attended the Marine Biology at the University of Hawaii.

Faber Dewar used to work as a woodworker from his early days. Likely he met his friend, Stephen Ritson in Los Angeles and opened Alderley Edge, together. It is a custom furniture business selling Japanese inspired furniture as well as an eclectic mix of mirrors made from reclaimed materials.

In addition, he is also a Precision Driver, and of course, a Furniture Maker having a successful furniture gallery. He has his furniture showroom in Venice California. He was approached to be a carpenter on the Hit TV Series titled, Trading Spaces while working on that showroom.

Dewar started his underwater film making after completing his study. He does SCUBA driving and talking about his other skills, they are  Stage Combat, Fencing, and Archery.

Dewar started his acting career in the year 1996. He has his film debut from The Big Easy playing as Mark Wallace. Likely in 1998, he played the role of Photographer in the series, Significant Others.

Likely, the actor played other differents significant roles. His role as Hacker in a 2007 biopunk science fiction film, The Gene Generation was one of his career breakthroughs. Further, he also portrays in the TV series, Making It Home: Greensburg in the year 2008.

In the year 2013, he has also played the role of Colonel Cameron in the movie, White House Down. The same year, he appears in the movie, Bare Knuckles as Dr.Faber.

Taking about his recent works, in the year 2016, he also portrayed in the movie, Independence Day: Resurgence by playing the role of Flight Commander (uncredited).

Being one of the successful personality, his net worth is around $17 million. Other information regarding his earning is not available.

He owns his own showroom and company which absolutely increase his earning.

He hasn’t been in an incident that could create any rumors about her. This star is also far from being in any controversy until now.

Faber Dewar has a built body standing with a height of 6 ft 1 inch and has a decent weight. Looking at his pictures we can say that, he has grey colored hair and dark brown colored eyes.