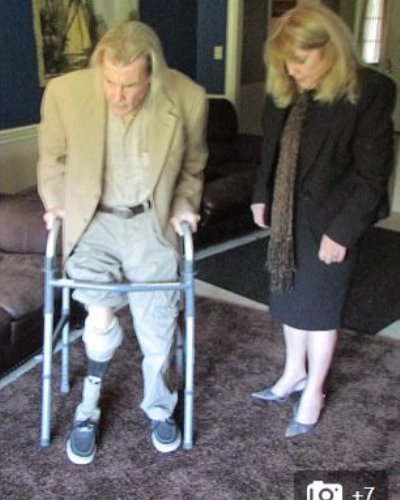 Patricia Ann Vincent is the third wife and now widow of late actor Jan-Michael Vincent who died at age 74 on 10 February 2019. She was a supportive wife to Jan-Michael and had been his pillar during his battle with alcoholism and drug addiction. She was there for him even during his health scars.

Jan-Michael Vincent who wed Patricia Ann in 2000 is now dead. He died on 10 February 2019 due to cardiac arrest. Jan-Michael had peripheral artery disease. He had detailed his problems in October 2014 when he gave an interview to National Enquirer.

He had said that due to his arterial disease, he had complications in the form of a leg infection. This infection was widespread and in order to prevent it from spreading to his whole body, his doctors advised below-knee amputation of the right leg. The surgeons performed the surgery on him and he used to wear a prosthetic limb. Sometimes, he used a wheelchair for locomotion.

His wife Patricia had put on a brave face during all this health downside of her husband. She had told that despite wanting to faint she was forced to be brave for her husband’s sake. She had also revealed that his doctors had labeled his health concerns as of bad prognosis.

Recalling a bad night in a hospital, she said:

“I remember one horrible night in the hospital. I had to help hold him down and keep the oxygen mask on him so he could breathe.”

His health was really bad and he was in the hospital for a very long time. But Patricia was by his side invariably. She assisted and supported him as he learned to walk with the prosthetic limb.

Patricia Ann and Jan-Michael and their wedding

Patricia Ann and Jan-Michael met after he had divorced his second wife Joanne Robinson in 1999. They began dating and in 2000 walked down the aisle together.

But despite the fact that the couple was inseparable in the latter half of their married life, in the initial days there was some marital turmoil. Jan-Michael was arrested for domestic violence. He also was in prison for 60 days for a probation violation.

Patricia Ann Vincent and her life before her marriage

Patricia Ann was born in 1953 and she is now aged 65. She had not disclosed any details about her schooling, college life, parents, or siblings. The name of her hometown is not known.

Patricia has also never told anyone what she was doing as a career before she met and got married to Jan-Michael.

In 1968, Jan-Michael married Bonnie and they had a daughter named Amber in 1972. But in 1977, he divorced her. Later in 1986, he married Joanne Robinson. But she left him in 1998 and had also got a restraining order against him. She stated that he was an abusive husband.

Jan-Michael Vincent and his death

Jan-Michael died on 10 February 2019 due to cardiac arrest in a hospital in Asheville in North Carolina. But the news of his death came out only on 8 March 2019. The death certificate reveals that no autopsy was performed and that his body was cremated soon after his death with due respect.