Had released three platinum-certified studio albums from 1995 to 2001. 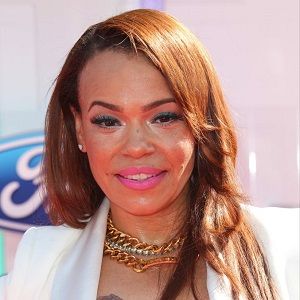 I'm really an inner spirit that only makes itself known through the music. A lot of people think I'm an introvert, or quiet and moody. I've even heard some people say that there's a certain mystery or darkness about me. I'm not that way. I'm just really into what I do: When I first met Big, we were both at a 'Bad Boy' family photo shoot. I was kind of familiar with the name Biggie Smalls, but I really wasn't that much into hip-hop at the time, so I really didn't know that was him. He said he didn't even know I was an artist on 'Bad Boy: My childhood was limited to mostly gospel music. We didn't have, like, a lot of records in our house, you know. It was like my grandparents who raised me. They were pretty old-fashioned in their religious ways, so it was like church, church, church, school, school, school.

Faith Evans is married to an American DJ Stevie J on the 17th of July 2018 in Las Vegas.

Previously, she was married to Todd Russaw in the year 1997. The couples have three children: Chyna Tahjere Griffin, Ryder Evan Russaw, Joshua. But suddenly in the year 2011, they were separated from each.

Likewise, in the year 1994, she had married to rapper Christopher ‘The Notorious B.I.G.’ Wallace, with whom she had a child named, Christopher Wallace Jr. in 1997. In the same year, the couple were separated before he was murdered mysteriously.

Besides this, she hasn’t mentioned about the past relationships of her life.

Who is Faith Evans?

Faith Evans is an American singer-songwriter. She is also a record producer, and actress. She had released three platinum-certified studio albums from 1995 to 2001.

Besides this, she has also written an autobiography, Keep the Faith: A Memoir, released in 2008.

Faith Evans was born on 10th June 1973 in Lakeland, Florida, the U.S. She was the only child of her mother Helene Evans who is a professional singer.

Her father, Richard Swain, left her when before Evans was born.

She is of African-American ancestry. She does not have any siblings.

Besides this, she hasn’t mentioned any kind of information about her birth facts as well as her childhood on social sites.

Moving towards her education history, Evans had attended the University High School in Newark, where she sang with several jazz bands and, encouraged by Helene.

After her graduation from her high school in 1991, Evans attended Fordham University in New York City to study marketing but left a year later to have a daughter Chyna with music producer Kiyamma Griffin.

She had also relocated to Los Angeles, where she worked as a backup vocalist for singer Al B. Sure! in 1993.

Evans started her career as a singer at the age of 2. She had caught the attention of the congregation of the Emmanuel Baptist Church in Newark when she sang The 5th Dimension’s song “Let the Sunshine In” at the age of 4.

In the year 2003, she had acted in the MTV-produced romantic comedy The Fighting Temptations in which she appeared in a brief but major role portraying a single mother and nightclub singer.

She had earned a brief guest stint on the UPN situation comedy Half & Half in 2004 and announced that she had been working on a synopsis for her own situation comedy that would be based largely on her life but with a more comedic aspect in the same year.

In 2008, she had released her autobiographic book called Keep the Faith: A Memoir which detailed the singer’s life and her controversial part in her life.

She was the winner of the Lady of Soul Awards for the category of ‘Best Female R&B/Soul Album’ for the album, ‘Faith’ in the year 1996.

Emily Ann Lloyd hasn’t mentioned her salary and but her net worth is $3 million. Her salary is over $1 million.

Like other celebrities, Faith Evans is a controversial person and has suffered from rumors and controversy. One of her recent rumors surrounded her son CJ’s sexuality.

Evans’ body measurement is 32-25-30 inches. Besides this, she has also mentioned her weight which is 56 kg, height is 1.68m, and bra size 32B. She has beautiful light browned hair with a dark brown eye.