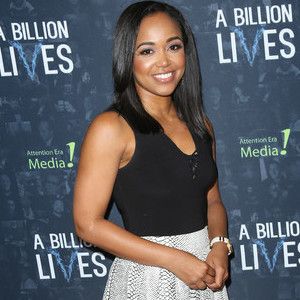 There have been no any instances of mentions about her personal relationship info. This includes her relationship past and history, current status, etc.

Similar is about her marital status. Her personal relationship infomation matters are a well-kept secret to date.

Who is Faith Jenkins?

Faith Jenkins is an American attorney, legal commentator and media personality. On March 11, 2014, she officially joined MSNBC as a legal analyst. She is also a judge on Judge Faith, a court show, where she renders decisions in a television courtroom.

Jenkins was born Faith Jenkins on November 25, 1977, in Shreveport, Louisiana, the United States of America. Her nationality is American and ethnicity is Afro-American.

Other than her date of birth and place of birth, other whereabouts of her parents and siblings, her early childhood days, teenage days, etc. are unknown to the media yet.

She graduated from C. E. Byrd High School in Shreveport, Louisiana. She attended nearby Louisiana Tech University, where she earned her bachelor’s degree in political science.

Faith earned her Juris Doctor from the Southern University Law Center in Baton Rouge, Louisiana, where she was ranked first in her class.

Jenkins participated in various beauty pageants and went on to win several major titles. She won the Miss Louisiana Tech title and was the first African-American woman to do so in 2000. She also competed in the Miss America 2001 competition and was the first runner-up. She also won the Quality of Life award and was the preliminary winner in swimsuit and talent.

She joined the NY office of Sidley Austin. She was a litigator for 5 years and later worked as an Assistant District Attorney. She used to work towards prosecuting criminals at the Manhattan District Attorney’s Office.

Faith also starred in many of the popular TV channels like CNN, MSNBC, Fox News Channel and Fox Business Channel in the capacity of a legal analyst, on such shows as Fox & Friends, The O’Reilly Factor, Hannity, Politics Nation with Rev. Al Sharpton, Studio B with Shepard Smith, Happening Now, Lou Dobbs Forum, Your World with Neil Cavuto, and Willis Report, as well as truTV’s In Session. She also used to write editorials and address current events in the New York Daily News.

In 2014, she was a Judge on the daytime TV show called Judge Faith. It was a “nationally syndicated arbitrations-based court” TV series which premiered in the air on September 22, 2014.

Faith Jenkins: Salary and Net Worth

While her salary figure is not known, she has an estimated net worth of $2 million.

There are no any much significant rumors or controversies surrounding her. She has, thus, managed to keep her public image clean.