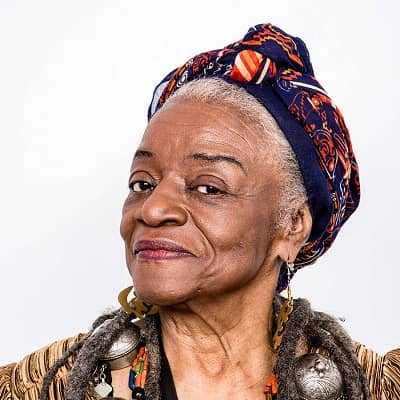 The multi-talented personality, Faith Ringgold is in a married relationship with Burdette “Birdie” Ringgold.

The couple wedded in 1962. Presently, they live in Englewood, New Jersey.

Previously, she had married Robert Earl Wallace. He was a jazz pianist. The couple married in the year 1950.

They had two children, Michele and Barabara Faith Wallace. However, the couple got separated after four years because of his heroin addiction.

Who is Faith Ringgold?

Also, she is the first female creator to give sewing, fabric, weaving, and embroidery the modification from craft to some significant subject of art.

Faith Ringgold was born on 8 October 1930. At present, her age is 90 years old. Likewise, her birthplace is Harlem, Manhattan, New York, the USA. Faith’s real name is Faith Willie Jones.

Ringgold is the daughter of her father, Louis Jones while her mother is Posey Jones. Professionally, her father worked as a truck driver whereas her mother was a fashion designer. Likewise, she has two siblings and is the youngest among her family member.

Talking about her nationality, Faith holds an American identity whereas her ethnicity is African American.

The artist was unable to attend her early school because of her health problems. She was an asthma patient. Faith was mostly in the hospital during her childhood. Meanwhile, she was fascinated and learned drawing at the time.

Faith studied at the City College of New York for arts but she was compelled to study art education in 1950. Further, she took her master’s degree from City College in 1959.

The artist also became the victim of racism. However, she persists due to her determination and perseverance.

After completion of her graduation, Ringgold served as an arts faculty in the New York City school. Also, she served at Wagner College and the Bank Street College of Education in 1960 and 1970s. After her post-graduation in fine arts, Faith moved to Europe in 1961 to know about Picasso, Matisse, and other artists.

Furthermore, she has painted the ‘U.S. Postage Stamp Commemorating the Advent of Black people ‘ in a grid form of 100 human faces that portrayed the ratio of African-Americans in the overall population.

she was distressed by the American Art Museum who mistreated the African-Americans. Afterward, she found the reason behind the non-existence of African artists in European art. Likewise, Ringgold enrolled with full-size portraits of famous people such as politician Adam Clayton Powell, Wilt Chamberlain, basketball players, and so on with the help of her mother.

Besides art, she is also famed for her social activism. Faith has fought for the goodness of the African artists at the Whitney Museum of American Art in New York with the help of the Ad Hoc Women’s Art Committee.

The artist, Faith is teaching in the Visual Arts Department at the University of California, San Diego. She quit her job after 2002.

The veteran artist has worked for more than 40 years in her profession.

It is reported that Faith Ringgold has an estimated net worth of $10 million.

However, she has never revealed her exact salary, earnings, and assets details till now.

Faith was the accuser in an important copyright case, Ringgold v. Black Entertainment Television (BET). BET has featured many episodes of the television series Roc in which a Faith poster was displayed on nine events for a total of 26.75 seconds.

Faith charged for copyright infringement. However, the court rejected the minimal things raised by BET and found BET liable.

90 years old, Faith Ringgold has not just a successful career but a beautiful appearance and admirable personality. She has black eyes as well as black hair.

Nevertheless, the famous personality has never revealed her exact height, weight, as well as other physical details publicly.

About her social media presence, Faith is active on social media. Ringgold has more than 7k followers on her official Instagram account @faithringgold.

She has nearly 2.5k followers on Twitter. Moreover, Faith is also available on Facebook with more than 3.5k fans and supporters.