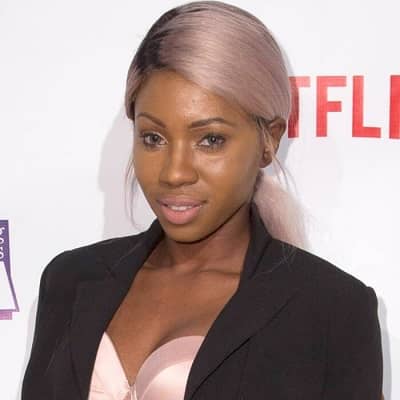 Talking about her relationship, Faith Stowers is currently committed to Marcio Marchena II. Likewise, the pair is comfortable with each other and has already engaged with her boyfriend in June of 2019.

They have a son named Marcio Rock Marchena III. The couple is seen together on their social media accounts.

Who is Faith Stowers?

Faith Stowers is an American TV personality, model, and reality star known for her appearances in the reality tv series, VanderpumpRules. Furthermore, Faith is known for appearing on reality shows such as Wipeout, Ex on the Beach, and The Challenge.

Her parents are Rocko Vantino Stowers and Darlette Patricia Stowers. Likewise, she is very close to her mother who often features on her social media.

Faith’s mother had been a great inspiration for her to pursue her career in the entertainment business. Likewise, She has two brothers, Rick Stowers and Mario Stowers, and two sisters namely Tafoyia Stowers and Charity Stowers.

She is of American nationality and falls under the Pisces zodiac sign. Talking about her education, she is a high school graduate.

Faith Stowers started her career after she joined the Tv Series, Wipeout (2009-2014). Later, she appeared on the Tv show “Fit Club” titled  “Fitness in the Social Media Age With Faith Stowers, Ca’Shawn Sims & Deserae Rose!”. Later, she came into the limelight after her appearance in the Bravo TV series Vanderpump Rules in the year 2015.

Moreover, she appeared in the series along with the likes of Kristen Doute, Katie Maloney Schwartz, Stassi Schroeder, Tom Sandoval, Scheana Shay, and Tom Schwartz. After that, she also made her appearance on reality shows like Ex on the Beach and The Challenge. Furthermore, Faith has graced the face of several clothing lines and accessories.

Moreover, she also appeared in Tv shows like “ Watch what happens live Andy Cohen” and “Entertainment Tonight” in 2020. Furthermore, Dayna herself confirms that she won’t return for Season 9 of the Bravo reality series, The VanderpumpRules.

Faith has an estimated net worth of $500K. Likewise, she has earned a hefty amount through her successful professional life as a model and tv personality.

Stowers has been involved in a couple of mini-controversies. In June of 2020, Kristen and Stassi were dismissed from Vanderpump Rules for Making racist comments and accusing Stowers of a 2018 crime that she had not committed.

Likewise, In 2017, Stowers talked in an impassioned way about black people winning Oscars in 2016 in her podcast. She was backlashed for the things she did until she took responsibility for her actions.

Faith stands 5 feet 3 inches tall but her weight is 57 kilograms. She has black hair and dark brown eyes. Moreover, her body measurements(chest-waist-hips) are 36-27-40 inches respectively.

“Vanderpump Rules’ Faith Stowers Clarifies Her Relationship With Jax Taylor!! Says: ‘One Thing Led To Another’